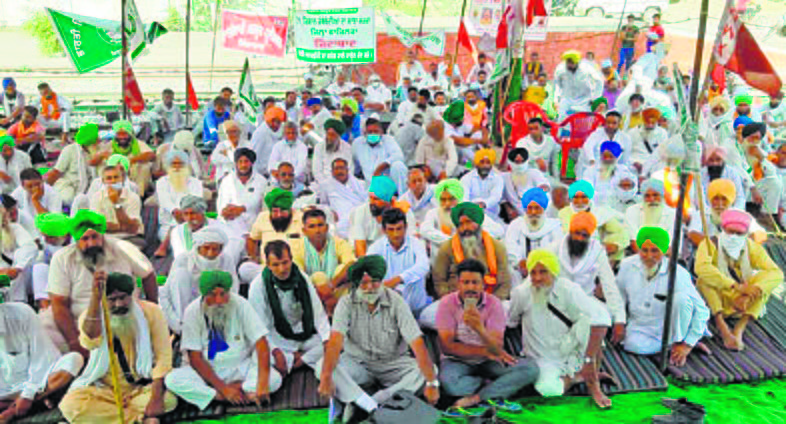 Activists of farmer unions stage a dharna on a railway track in Fazilka. Tribune photo

The Bhartiya Kisan Union (Lakhowal) rejoined the “rail roko” agitation in Fazilka today. The president of the BKU Fazilka unit, Gurbhej Singh, said, “We were part of the agitation and will continue to be so. We will work in tandem with other unions in the larger interest of the farmers.”

Office-bearers of the BKU (Lakhowal) were suspended from the coordination committee for moving the Supreme Court against farm laws without taking other organisations into confidence. Since then, activists of the Lakhowal group were not being allowed to take part in the agitation. Later, the union withdrew the petition. Today, their activists protested on a railway track with others.

Amritsar: The Kisan Mazdoor Sangharsh Committee has condemned the Haryana Government for getting an FIR registered against their counterparts in the state over the death of a farmer during a BJP tractor rally in support of farm laws in Ambala.

A 72-year-old farmer had died on October 14 and the case was registered against several persons after the deceased’s son claimed some protesters were behind his father’s death.

Terming it a political move aimed at scuttling the farmers’ protest, committee state general secretary Sarwan Singh Pandher claimed the case was wrongly twisted at the insistence of the BJP government in Haryana.

“Our colleague in Haryana told us the farmer had died of heart attack and no one could be blamed for the unfortunate incident. He had suffered heart attack twice earlier too. But the Haryana Police were made to file a case under Section 307 (attempt to murder), IPC, against our supporters with the intention of disrupting our protest,” he said. The committee had been blocking the rail track near Devi Daspura village for the past 22 days to protest the farm Acts.

He said the BJP’s MP-level meeting was held with Haryana farmers which too remained inconclusive.

The committee urged the Chief Minister to grant at least Rs 20 lakh relief each to the next of kin of farmers who died during the ongoing agitation in Budhlada and Sangrur.