Dr Manohar Singh, brother of Chief Minister Charanjit Singh Channi, today filed his nomination from Bassi Pathana constituency as an Independent candidate. He handed over a set of papers to SDM-cum-Returning Officer, Bassi Pathana, Yashpal Sharma. As per the affidavit submitted to RO, CM’s brother has immoveable assets worth Rs 2.60 crore, including of his spouse and inherited. He has a moveable property worth Rs 1,01,05,077, including his spouse’s. He has four vehicles Fortuner, Thar, Ciaz and Swift Dzire. He has a bank loan of Rs 3,92,0985. 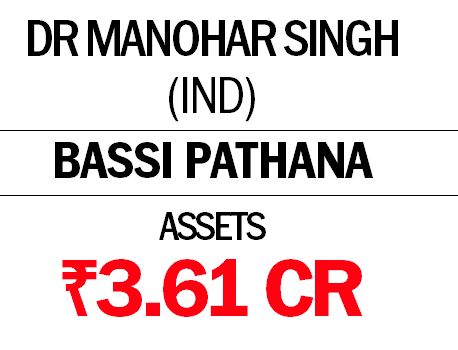 Before filing nomination, he addressed a massive gathering of his supporters at his election office in Bassi Pathana. He said he would win the seat and support his brother. He lashed out at the Congress candidate and termed him a failed politician. He said he had applied for the Congress ticket and wanted to be allotted on merit as he has been serving the constituency for a long time and the people wished he should represent them from Bassi Pathana. He said being the brother of CM was not a sin.

Meanwhile, only three nominations were filed in all three constituencies of the district. In Fatehgarh Sahib constituency, no nomination has been filed, whereas in Amloh SAD candidate Gurpreet Singh filed the nomination. — OC