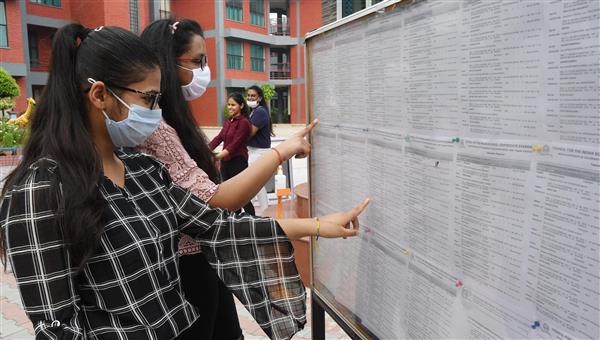 Local girl Ananya Sharma secured the first rank in Jalandhar district with 99 per cent in the Class X ICSE examinations, the results of which were declared today.

The second and third positions were also bagged by girls. Harshita and Anshika Kohli shared the second spot with 98.8 per cent. The third position was shared by Durva Garg and Harsirat Kaur Pannu, both scoring 98.4 per cent.

District topper Ananya said she used to study for three to four hours daily with a half-an-hour break after every hour. “I will opt for commerce, as I want to become a chartered accountant,” she added.

She scored the perfect 100 in maths and computers.

Divya Aggarwal, a student of St Joseph Convent School, has bagged the first rank in Hoshiarpur district. She secured 99.2 per cent. The second position was bagged by Ridhi and Adritya. Both scored 98.8 per cent.

Divya said she maintained an easy timetable throughout the year. “I was a regular student in school and studied for two to three hours every day,” she said, adding she had opted for the medical stream in Class XI and wanted to become a doctor.

In Bathinda, Mahima Goyal of Saint Paul’s High School topped the district with 96.5 per cent. The second position was shared by Ayush Joshi and Swastik Bansal with 94.2 per cent, while Dhawanpreet Kaur and Tanveer Kaur bagged the third rank with 93.8 per cent.