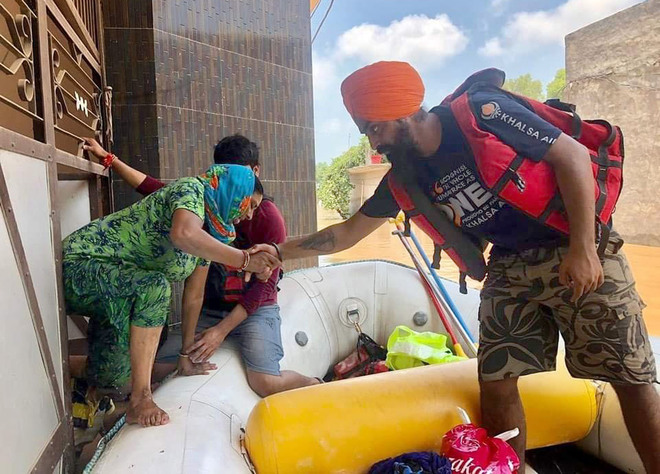 A Khalsa Aid member works in a flood-hit area in Shahkot. File

United Kingdom-based non-governmental organisation (NGO) Khalsa Aid has been nominated for the Nobel Peace Prize for its humanitarian work.

We are deeply humbled by this nomination. Everything we do is because of our amazing teams and volunteers all around the globe. We are grateful for this historical nomination.

In the letter written to Berit Reiss-Andersen, Chair, The Norwegian Nobel Committee, Tim Uppal has stated that Khalsa Aid is an international NGO with an aim to provide humanitarian aid in disaster areas and civil conflict zones around the world.

It also stated that Khalsa Aid became the first-ever cross border international humanitarian aid organisation based on the Sikh principle of recognising the whole human race as one.

Further, it states that it was founded by Ravinder (Ravi) Singh, who was stuck by the plight of the refugees in Kosovo in 1999. The charity has been providing support around the world to victims of natural and manmade disasters such as floods, earthquakes, famines and wars for over 20 years.

Uppal also writes that Khalsa Aid, inspired by the Sikh ideology of ‘Sarbat da bhala’ (well-being of all), has been helping all those in need regardless of race, religion and border.

He also said Khalsa Aid represented exactly the kind of international cooperation and commitment the world needed in today’s times.

We are completely humbled to receive the Nobel Peace Prize nomination from @TimUppal, @patrickbrownont and @PrabSarkaria

Ravi Singh reacted on social media, saying, “We are deeply humbled by this nomination. Everything we do is because of our amazing teams and volunteers all around the globe. We are grateful for this historical nomination.”

It is worth mentioning that Khalsa Aid has been actively serving the farmers who have been protesting at the Delhi borders for 53 days. It has also set up a Kisan Mall at the Tikri border.

On January 16, the National Investigation Agency (NIA) issued summons to Khalsa Aid’s India director Amanpreet Singh and other trustees and asked them to depose before the agency.