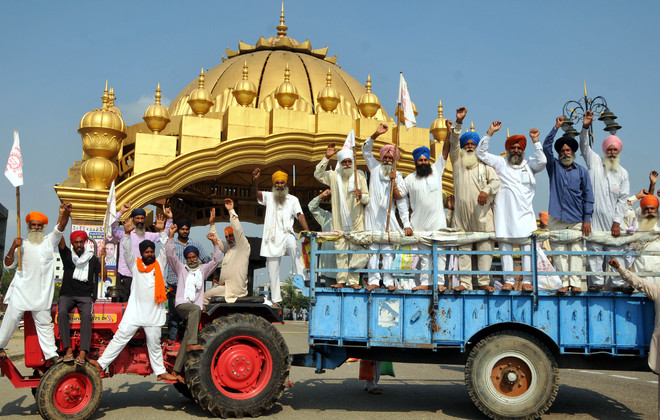 Farmers protest at the Golden Gate in Amritsar. Vishal Kumar

A complete bandh was witnessed in Gurdaspur, Batala, Pathankot, Sujanpur, Dera Baba Nanak, Fatehgarh Churian, Sri Hargobindpur and Qadian towns even as office-goers faced inconvenience at almost all places as all modes of transport remained suspended.

The Gurdaspur-Batala and Gurdaspur-Pathankot national highways remained blocked throughout the duration of the bandh. However, ambulances were allowed to run.

At some places, particularly near the Civil Hospital at Babri, farmers could be seen facilitating the movement of patients and their kin towards the hospital.

In Pathankot, which is known as a traders’ hub having a substantial chunk of BJP vote, it was widely expected that shops and commercial establishments would remain open or at least partially open, but all this speculation remained unfounded.

In Batala, activists of the Samyukt Kisan Morcha blocked traffic at Gandhi Chowk and near VMS Educational Institute on the Batala-Amritsar road. SSP Ashwani Kapur said farmers held protests at 19 points in the city. The bandh proved to be a success in rural as well as urban areas in Amritsar as majority of markets remained closed and people in large numbers gathered on roads to block vehicular traffic to support the cause.

Railways officials said six trains were cancelled and three were rescheduled from the Amritsar railway station. Members of the Kisan Sangharsh Committee blocked the passport office after learning about it being functional. However, finding the applicants having come from far-off places, they lifted their protest at 2 pm. — TNS