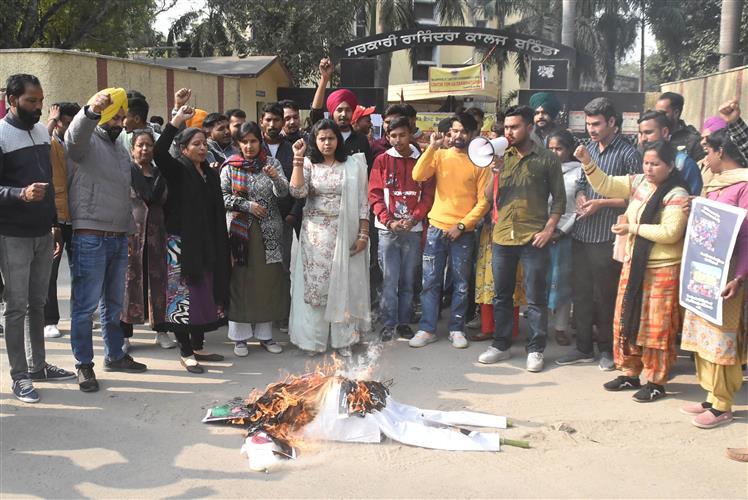 Reeta Aggarwal, association president, said: “As per the HC’s December 3 directions, there is a restriction on recruitment of professors in colleges. But, it has been observed that the government is still busy in the process. We will intensify our stir if we don’t get a written confirmation for our jobs. We have been working for the past over 15 to 20 years, but our services have not regularised.” — TNS

Patiala: Passengers will be on the receiving end as contractual staff of the Pepsu Road Transport Corporation (PRTC) and the Punjab Roadways will go on an indefinite strike from Tuesday. Around 7,500 employees will remain off duty to press for regularisation. The protesting employees claimed around 80% of the buses would not ply. Meanwhile, the PRTC administration has already told the contractual staff that they would be liable to action if they participated in the strike. TNS

Fazilka: Contract and outsourced Class C and D staff went on a mass leave here on Monday. As a result, patients, using opioid medicines, could not get rehab drugs, forcing them to protest outside Jalalabad Civil Hospital on the Fazilka-Ferozepur highway. Sukhdev Singh, a patient, said he covered 12 km, but had no info about the strike. Nodal officer Dr Sidharath Kalucha said it was necessary to provide medicines to the patients on priority, and assured of making the arrangements soon. OC