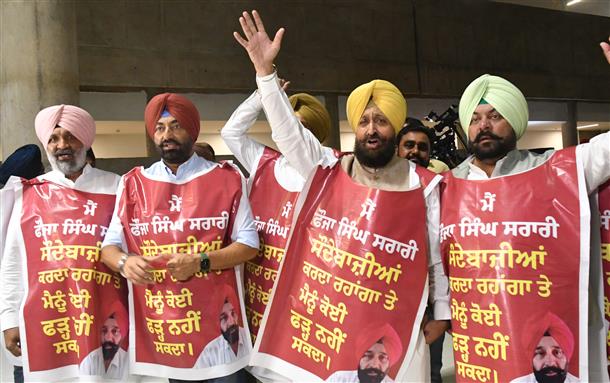 The second day of the Punjab Assembly session began on a stormy note today as Opposition Congress MLAs created a ruckus demanding Horticulture and Food Processing Minister Fauja Singh Sarari’s arrest and dismissal from the Cabinet over an audio clip in which he is purportedly heard discussing ways to trap some contractors to “extort” money.

With Chief Minister Bhagwant Mann absent, the ruling AAP legislators appeared to be lacking a definite strategy to counter an aggressive Congress that refused to allow the House to function. Led by Leader of Opposition Partap Singh Bajwa, the Opposition MLAs sought Mann’s statement on the issue and an assurance on action against the minister.

Bholath MLA Sukhpal Khaira asked Speaker Kultar Singh Sandhwan to give an undertaking that CM Mann would give a statement on the issue, which the latter denied. A move by the Treasury benches to counter the Congress protest by raking up the SC scholarship scam failed to deter the Opposition. “With the House proceedings being telecast live, the public will get to know the double-standards of the AAP government on corruption,” said Deputy Leader of Opposition Dr Raj Kumar Chabbewal.

Gidderbaha MLA Amrinder Raja Warring sought to know from the CM the government’s stand on the matter. “On one hand you arrest former Health Minister Vijay Singla on the basis of an audio clip and in another case, no action is taken against Sarari despite the audio going viral,” he said.

Amid palpable confusion in the Treasury benches, the Congress kept the pressure on the AAP MLAs till the session ended at 5.30 pm.