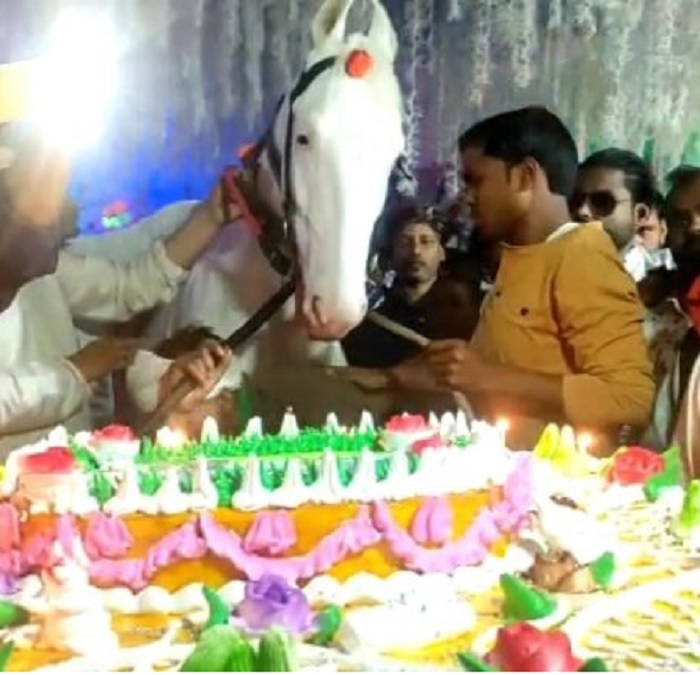 Usually one is invited for the birthday party of a child or an adult, but in a unique case a man from Bihar's Saharsa district celebrated his horse's birthday by throwing a lavish party. He also cut a 50-pound cake and invited a large number of people for a delicious meal.

Golu loves Chetak like his own child. On Monday morning, Chetak was given a bath and was decked up for his birthday celebration in the evening.

Golu Yadav said Chetak is like a member of his family and refused to call him an animal. He said that Chetak's first birthday was also celebrated in a similar fashion.

The cake was placed in front of Chetak. There was also a picture of him on the cake as well as his name. Afterwards, the cake was cut by Golu and firecrackers were burst. A large number of people living near Golu's house attended the celebration.

Golu says that he has not celebrated his own birthday till date but celebrates Chetak's birthday every year. He said he had brought Chetak to his home at the tender age of six months and initially reared him on milk.

Golu confessed, "I have brought up Chetak like my own child. I have given him more love than my own children. " Golu says that both vegetarian and non-vegetarian dishes were served at this party. Expressing unhappiness over violence against animals, Golu says that today the animals are more loyal than human beings. IANS