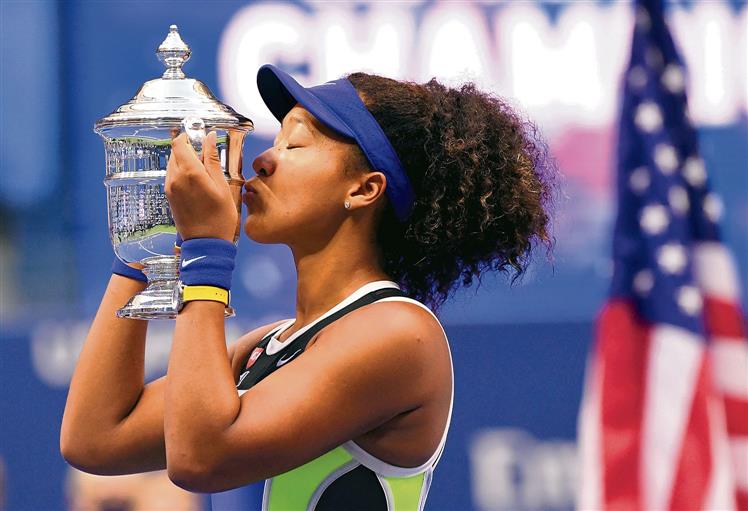 Naomi Osaka ended Victoria Azarenka’s dream run to claim her second US Open title in three years with a 1-6 6-3 6-3 comeback win yesterday which cemented her status as the sport’s leading light both on and off the court. Unlike the 22-year-old Japanese’s first US Open win in 2018 over Serena Williams, which was played in a frothing Arthur Ashe Stadium, yesterday’s drama unfolded in a strangely quiet arena as Covid-19 health and safety protocols prevented fans from entering the Billie Jean King National Tennis Center.

But the lack of buzz around the stands did not stop the two former world No. 1s from producing a dazzling display of shot making. As Osaka walked off with a third Grand Slam title, Azarenka was denied a US Open crown for a third time having also finished runner-up in 2012 and 2013. Still it was a remarkable and unexpected run for the 31-year-old Belarusian, who reached her first Major final in seven years.

It was the second time in two weeks Azarenka, twice a winner at the Australian Open, and Osaka had set up a final showdown. The pair had been set to meet in the Western and Southern Open final until Osaka withdrew due to a hamstring injury.

“I actually don’t want to play you in more finals,” Osaka told Azarenka with a smile during the victory ceremony.

“I didn’t really enjoy that. That was a really tough match for me. And yes, really inspiring for me because I used to watch you play here when I was younger so just to have the opportunity to play you is really great and I learned a lot.” — Reuters

3 \rd Grand Slam title for Naomi Osaka. It is her second US Open title in three years

3rd US Open final loss for Victoria Azarenka. She lost to Serena Williams in 2012 and 2013 Having clawed her way back after years of setbacks in her career and personal life, US Open runner-up Victoria Azarenka said that she wouldn’t let her three-set loss to Naomi Osaka in the final keep her down for long. “I’m not necessarily disappointed. It’s just painful. It’s painful to lose. That is what it is,” the twice Australian Open champion said. “Am I going to think about it too long? Not at all. I’m not going to sit here and be miserable.” The former world No. 1 has plenty to be happy about: After securing her first WTA title in four years at the Western & Southern Open last month, yesterday marked her first Grand Slam final appearance in seven years. Azarenka, a U.S. Open runner-up in 2012 and 2013 as well, returned from maternity leave in 2017 only to have a bruising custody battle with her former partner that kept her from competing in that year’s Flushing Meadows campaign. The unseeded Belarusian was not expected to be a top contender this year, but defied the odds nonetheless. “I’m a human being that has doubts, that has fears, that has different kinds of emotion which are so normal,” she said. “It’s just the difference that those emotions are not going to stop me from doing what I’m going to do.” Reuters