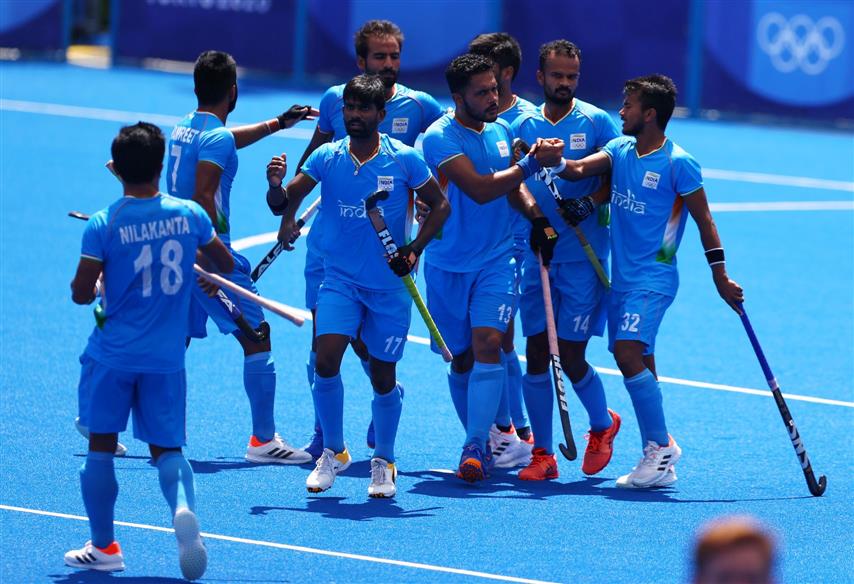 The eight-time winners of Olympic gold, the last of which came way back in 1980, fell short against world champions Belgium, losing 2-5 in the semifinals here on Tuesday.  Reuters

The 2-5 loss to Belgium in the Olympic semifinals on Tuesday is disappointing but Indian men's hockey team captain Manpreet Singh and star custodian P R Sreejesh said the side has no time to dwell on the heartbreak as it has to refocus for the bronze medal play-off on Thursday.

Also read: ‘India is proud of its players’, ‘never ever give up’, encouraging words flood Twitter to cheer hockey team

The eight-time winners of Olympic gold, the last of which came way back in 1980, fell short against world champions Belgium, losing 2-5 in the semifinals here on Tuesday.

"It is really hard for me right now because we came with a winning mindset, but unfortunately we didn't win the match. Now we need to focus on our next bronze-medal match and we need to work and we need to get the medal," Manpreet said after the loss.

"It's a great honour for us reaching the semifinal after a long time, but now I think we need to focus because the next match is going to be really important for us. At least we should win a bronze medal for the nation," he added.

The skipper said having toiled hard for the last five years to reach this level, India deserved a better result on Tuesday.

"It's always been hard work and togetherness. This team has been together for the last four or five years. We have worked really hard to be reaching this level. We deserve better, and unfortunately we couldn't get it today."

Sreejesh agreed with his skipper and said the loss against Belgium is a thing of the past now and the team needs to focus on returning home with a medal from here.

"Disappointed, but you don't have time to worry about that. You need to forget about that and think about the future. Now we still have a chance to win a medal and that's more important for us than crying at this time," he said.

"It's more important for us to think about the future, watch the match, think about where we lost, where we committed the mistakes, rectify that, and move on," added.

Senior India defender Rupinder Pal Singh too feels that all is not lost in the ongoing Games for them.

"Of course it's heartbreaking for us, reaching the semifinal after 41 years and we were here to win a gold medal. That was our aim, but we lost today. The great thing is we have a chance to finish third in the next game so we will focus on that," he said.

Rupinder believes a medal from Tokyo will be big for the sport back in the country.

"If we win that, it's going to be for us only. Of course there are a lot of people behind this and supporting us. But we are going to win for us first and then (everyone else). That's a great motivation, too," the tall drag-flicker said.

Rupinder credited team's self belief for its success in Tokyo.

"That's the hard work behind it and the belief. That's the most important thing behind (us) reaching here. I feel like the younger guys are working really hard for us and we are converting good chances.

"We need to work hard for the next game."

Manpreet and Sreejesh, meanwhile, were also in awe of the women team's feat in the ongoing Games and wished the side luck for the maiden semifinal appearance against Argentina on Wednesday.

"They played an amazing game against Australia. We wish them the best of luck for their semifinal (against) Argentina. I hope they win," Manpreet said.

Sreejesh added: "That's a great wake-up. The first three matches they lost, but the girls fought really well and won the last three matches, which was so crucial for them.

"Yesterday's match, upsetting Australia, that was a tough call and I think the girls are tough enough to win a medal in this tournament."

Sreejesh praised Belgium's Alexander Hendrickx, who made all the difference by scoring a hat-trick to take the Red Lions into the Olympic semifinals for the second consecutive time.

"He (Hendrickx) always scores at the right time. That gives the team more confidence. I think the second goal was a bit my mistake, but still, the way he flicks the ball it is always a bit tough for a goalkeeper," he said.

India will face the losing team from the other semifinal, between Australia and Germany, in the bronze medal play-off match on Thursday. PTI