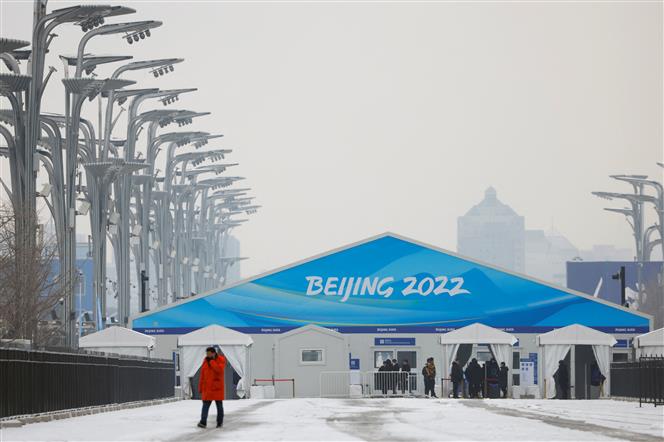 A man walks amid snowfall outside an entrance to the closed loop "bubble" surrounding venues of the Beijing 2022 Winter Olympics in Beijing, China, on January 20. Reuters

China's capital Beijing ramped up efforts to curb Covid-19 infections, ordering checks among cold-chain firms and urging residents to cut unnecessary gatherings, as the city reported an uptick in local cases weeks before the Winter Olympics.

Beijing had three domestically transmitted infections with confirmed symptoms on Wednesday, including one previously reported as a local asymptomatic carrier for January 18, according to local health authority data on Thursday.

That compared with one local confirmed infection for January 18.

The city has reported less than ten local Covid infections since January 15, with both the Delta and Omicron variants detected, a tiny case count compared with the rest of the world.

However, the city and China are still working under guidelines of getting any virus flare-up under control as soon as possible. The strategy takes on extra urgency as Beijing and neighbouring Hebei province will host the Winter Olympics from February 4, while the ongoing Lunar New Year travel season raises the risk of virus transmission nationwide.

The city of Beijing should immediately launch full inspections over its cold-chain industry and make the testing of staffers and goods more frequent, the city government said in a statement late on Wednesday, after some infections were found to be cold storage workers.

Residents are advised to reduce movement and unnecessary gatherings, while children, the elderly and people in weaker health should avoid crowded public places, the city's health authority said in a statement on Wednesday.

Nationwide, China reported a total of 43 locally transmitted infections with confirmed symptoms for Jan. 19, according to a statement by the National Health Commission on Thursday, down from 55 a day earlier.

There were no new deaths, leaving the death toll at 4,636.

As of January 19, mainland China had 105,411 confirmed cases, including both local ones and those arriving from overseas. Reuters