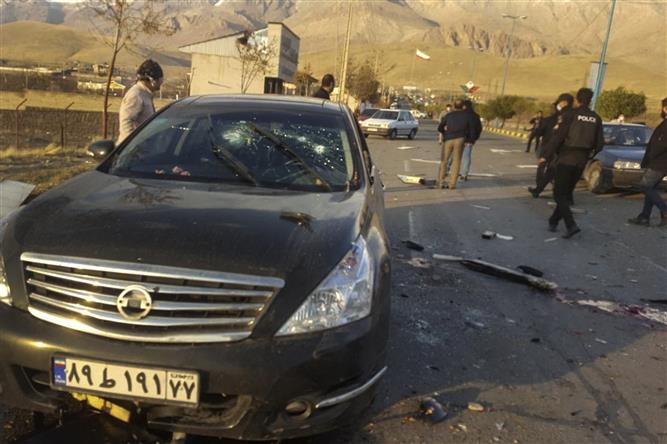 This photo released by the semi-official Fars News Agency shows the scene where Mohsen Fakhrizadeh was killed in Absard, a small city just east of the capital, Tehran, Iran on November 27, 2020. AP/PTI

An Iranian scientist long suspected by the West of masterminding a secret nuclear bomb programme was killed in an ambush near Tehran on Friday, likely to provoke confrontation between Iran and its foes in the last weeks of Donald Trump’s presidency.

The military adviser to Iranian Supreme Leader Ayatollah Ali Khamenei vowed to strike against the killers of Mohsen Fakhrizadeh, who died of injuries in hospital after armed assassins fired on his car, state media reported.

“We will strike as thunder at the killers of this oppressed martyr and will make them regret their action,” tweeted Hossein Dehghan, also a military commander.

Fakhrizadeh has long been described by Western countries as a leader of a covert atomic bomb programme halted in 2003, which Israel and the United States accuse Tehran of trying to restore in secret. Iran has long denied seeking to weaponise nuclear energy.

“Unfortunately, the medical team did not succeed in reviving (Fakhrizadeh), and a few minutes ago, this manager and scientist achieved the high status of martyrdom after years of effort and struggle,” Iran’s armed forces said in a statement carried by state media.

Semi-official news agency Tasnim said “terrorists blew up another car” before firing on a vehicle carrying Fakhrizadeh and his bodyguards in an ambush outside the capital.

Whoever is responsible for the attack, it is certain to escalate tension between Iran and the United States in the final weeks of Trump’s US presidency.

Trump, who lost his re-election bid on November 3 and leaves office on January 20, has repeatedly accused Iran of secretly seeking nuclear weapons. Trump pulled the United States out of a deal under which sanctions on Iran were lifted in return for curbs on its nuclear programme. President-elect Joe Biden has said he would restore it.

A US official confirmed earlier this month that Trump had sought from military aides a plan for a possible strike on Iran, but had decided against it at that time.

Fakhrizadeh is thought to have headed what the UN nuclear watchdog and US intelligence services believe was a coordinated nuclear weapons programme in Iran, shelved in 2003.

He was the only Iranian scientist named in the International Atomic Energy Agency’s 2015 “final assessment” of open questions about Iran’s nuclear programme.

The IAEA’s report said that he oversaw activities “in support of a possible military dimension to (Iran’s) nuclear programme” within the so-called AMAD Plan.

“Remember that name, Fakhrizadeh,” Netanyahu said at the time.

On Friday before the news of the attack on Fakhrizadeh emerged, an Israeli official said Israel was discussing with and Gulf Arab states how to tackle Iran.

“The story is not Trump, nor even Israel. The story is Iran - the growing dread that a new U.S. administration will go back to the nuclear deal which threatens the very existence of the Gulf countries,” Tzachi Hanegbi, who sits in Netanyahu’s security cabinet, told Tel Aviv radio station 102 FM. “We will know how to handle the issue of the Iranian threat, even if through our own means.” --- Reuters