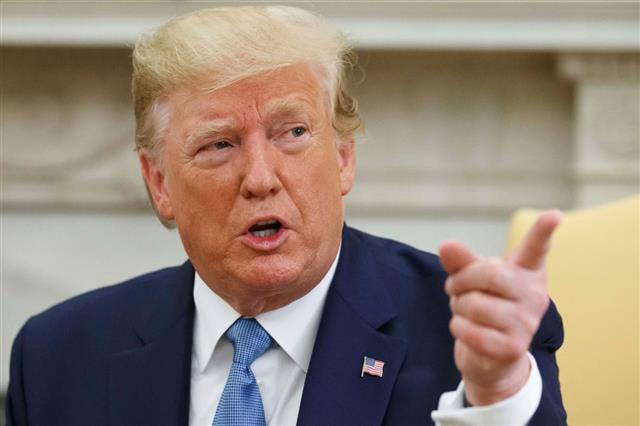 US President Donald Trump drew scorn and laughter on social media on Sunday after placing the Kansas City Chiefs in the wrong state following their Super Bowl victory.

Trump said the Chiefs had made Kansas State proud, but the team actually hails from neighbouring Missouri.

“Congratulations to the Kansas City Chiefs on a great game, and a fantastic comeback, under immense pressure,” he tweeted.

“You represented the Great State of Kansas and, in fact, the entire USA, so very well. Our Country is PROUD OF YOU!”

He later deleted the tweet, and replaced it with the one naming the correct state.

Reaction online was swift -- and not too polite -- towards a commander-in-chief who has a troublesome history with maps.

“It’s Missouri you stone cold idiot,” responded a former US senator from the state, Claire McCaskill.

Lauren Arthur, a current Missouri state senator, tweeted: “Wrong state. Best stay out of things you don’t understand, like the Heart of America.”

The gaffe follows Trump’s Secretary of State Mike Pompeo asking a reporter last week to place Ukraine on a map.

“This tweet comes amid an ongoing news cycle where Trump’s Secretary of State - who is very prominently from Kansas - claimed a reporter couldn’t find something on a map,” one journalist noted.

Others referenced “Sharpiegate”, when during Hurricane Dorian in September last year Trump said the storm would “most likely” sweep Alabama -- and produced a doctored weather map to support his claim. The storm did not reach Alabama.

“Someone quickly take the Sharpie...out of Trump’s hands before he redraws the map of Kansas,” tweeted writer and television producer Bryan Behar, referring to the brand of pen.

Greg Krieg, a CNN politics reporter, tweeted: “Tomorrow: Trump waves around a map in Oval Office showing that Kansas City is, in fact, in Kansas.” AFP