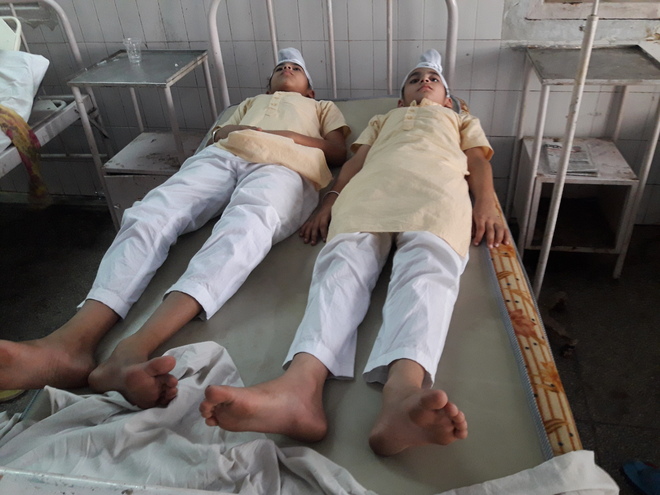 Seven persons were taken ill after consuming ‘parshad’ at Gurdwara Bhagat Baba Namdev, Mohalla Tonk Kashatrya, here on Saturday. They were admitted to the local Civil Hospital, from where three of them were referred to Guru Nanak Dev Hospital (GNDH) in Amritsar.

According to the police, the patients were identified as Baba Balbir Singh (65), the granthi of the gurdwara, his wife Gurmeet Kaur (63), two grandsons Tejinderpal Singh (12) and Gurjotpal Singh (10), Raghubir Singh (35) of Tarn Taran, Paramjit Kaur (42) and her son Jashanpreet Singh (21) of Banga. Raghubir, Paramjit and Jashanpreet Singh were referred to GNDH.

Baba Balbir Singh, in his statement to the police, said after performing the bhog ceremony of Sharanjit Kaur, Paramjit, at their residence in the locality, ‘parshad’ was taken to the gurdwara with Guru Granth Sahib and distributed among those present there. After his grandsons complained of bad taste of the ‘parshad’, the granthi himself tasted it. Later, all those who had the ‘parshad’ were taken ill.

Baba Balbir Singh said the ‘parshad’ distributed at the residence was harmless but some poisonous substance got mixed in it later and only those who had the ‘parshad’ at the gurdwara fell sick.

DSP Sucha Singh Bal said on the basis of information given by SHO Shaminderjit Singh, a case under Section 328 of the IPC had been registered against unknown persons.