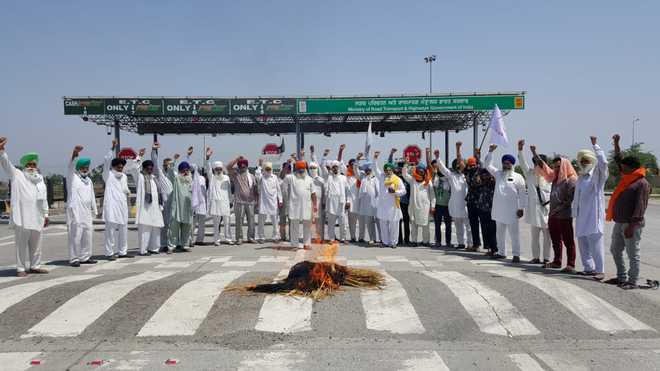 Members of the Kisan Mazdoor Sangharsh Committee burn an effigy of the Union Government at Usman toll Plaza on Monday.

The core committee of the Kisan Mazdoor Sangharsh Committee(KMSC), Punjab, at its meeting held here on Monday condemned the Manohar Lal Khattar government for lathi-charge on farmers protesting peacefully and arresting more than 200 of them.

The organisation demanded immediate release of the arrested farmers. The committee workers held protests in different villages across the state against and the Union Government.

Satnam Singh Pannu, state president, and Sawinder Singh Chutala, vice-president of the organisation, while addressing the protesters, said the village-level units of the committee would observe a black day on May 26 on the completion of six months of the farmer agitation on Delhi borders. The leaders said that the committee activists would hoist black flags at rooftops and burn effigies of the Modi government. The leaders demanded repeal of the three farm laws. The leaders alleged that the Union and state government had failed to provide proper treatment to the Covid-19 infected persons. The organisation demanded vaccination for all in government hospitals.

The protesters warned the government that if their demands were not accepted they would intensify their stir in the coming days.