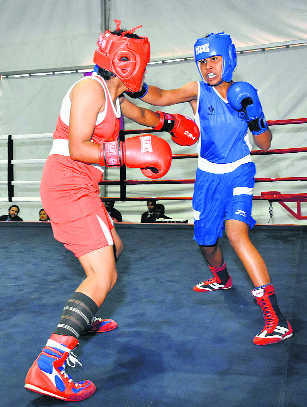 A boxer throws a punch during a bout of the 2nd Junior National Championships at Chandigarh University Gharuan. Tribune Photo

In the 50kg bout, the Assam pugilist began as a favourite however Bidyapati registered a 4-1 upset. The Manipuri boxer, with no baggage, was all over her Assamese opponent and landing her combination punches impressed one and all which culminated in her winning the bout on spilt decisions. Aashreya Naik proved her superiority over Punjab's Jashanpreet Kaur as she registered 5-0 in the 60 kg class.

The Goan boxer with good international exposure under her belt had won a silver medal at the Selesian Cup in Poland, took her Punjab opponent with ease.

Meanwhile, in the men’s category, Services boxer  Sanjeet, who celebrated his nomination as Asia’s best boxer in the Asian Boxing Confederation polling, fought fiercely against Manish Rathore of Uttar Pradesh in the 46 kg class before forcing the referee stop the contest for the RSC-3 verdict. Both the pugilists began well and continued even as the former was at the receiving end from the beginning.