If anyone is still puzzled why the Indian Left is in the state it is in, they needn’t go beyond the controversy raging in the CPM over its approach towards the Congress as it prepares its strategy ahead of the 2019 General Election. 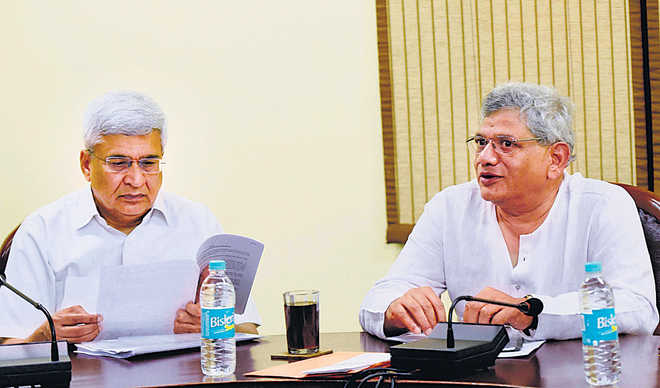 At odds: Sitaram Yechury (left), the moderate and reformist face of the CPM, is facing tough opposition from hardliners led by his predecessor Prakash Karat. File

If anyone is still puzzled why the Indian Left is in the state it is in, they needn’t go beyond the controversy raging in the CPM over its approach towards the Congress as it prepares its strategy ahead of the 2019 General Election. What the party calls a healthy democratic debate actually reveals deep divisions and factionalism at the highest level of its leadership. But more worrying for its future is that it shows how the party continues to be a prisoner of its old ideological reflexes, and in the grip of status quo-ists. And nowhere is it more apparent than in its visceral hostility to the Congress. One doesn’t have to be a Congress apologist to see the folly of a policy that is certain to weaken the fight against forces that the CPM itself regards as posing an existential threat to India’s cultural unity and community relations.

Sitaram Yechury, who represents the moderate and reformist face of the party, came close to resigning his post as the party general secretary after hardliners led by his predecessor Prakash Karat knocked down his proposal for an “understanding” with the Congress as part of a broader mobilisation of “secular and democratic forces” to defeat the BJP. Yechury is still putting on a brave face saying that he expects better counsel to prevail at the Party Congress, its highest decision-making body, when it meets in Hyderabad in April. But he knows the dice is loaded against him given the dominance of the Congress-phobic faction in the party. His job is now on the line and most likely he will be shown the door at the Hyderabad congress just after one term-and replaced by a hawkish comrade. Goodbye, then, to any hope of the party shedding its blinkers.

One of the arguments against doing business with the Congress is that the party’s alliance with it in the last West Bengal assembly elections proved disastrous for it and ended up benefitting the BJP. Having burnt its fingers once, it doesn’t wish to repeat the mistake, the argument goes. It’s true the alliance didn’t work for the CPM, but there’s no hard evidence to suggest that it would have fared better had it gone it alone. Another argument against any understanding with the Congress is that it will not go down well in Tripura, which goes to the polls later this month, and in Kerala. In both states, the Congress is its main rival.  But commentators have pointed out that its support to the Congress-led UPA government in 2004 didn’t jeopardise the Left parties’ prospects in the Kerala assembly elections held two years later with the Left Democratic Front wining 99 out of the 140 seats.

The fact is that the party is throwing red-herrings to distract attention from the real elephant in the room. Which, as pointed out earlier, is the party’s historic  antipathy to the Congress because of its experience of the Congress’ repression of the Left in the past; the arbitrary dismissal of the EMS Nambooripad government in Kerala in 1959 still rankles after all these years.  But mostly it arises from an ancient and selective analysis of the Congress’ class character. In characterising it as a party of landlords and capitalists, the analysis fails to recognise its role in carrying out significant progressive reforms — abolishing zamindari, doing away with princely privileges, and nationalising private banks. Not to mention its mass-based character and the fact that it has been — and still is — the only broad church in national politics.

Meanwhile, a new charge levelled against the Congress relates to its “neo-liberal” economic agenda which a senior CPM official has likened to the threat from communalism suggesting that the Congress is as dangerous as the BJP. Such is its aversion to the Congress that the CPM refused to seek its support for Yechury’s re-election to the Rajya Sabha. It preferred to sacrifice a much sought after Rajya Sabha seat than be seen in Congress company. The debate over the Congress has been raging for as long as one remembers, and has become a running sore — much like British Conservatives’ fixation with Europe which, even as I write this, is tearing them apart in the form of Brexit. Even when the CPM went for an alliance with the Congress in the West Bengal assembly polls, its official line remained forging  a “third front” to take on both the “communal” BJP and “pro-capitalist” Congress.

Its obsessive anti-Congressism has caused divisions not only within the party, but has been a source of tension with its other Left allies. Its latest move has been criticised by the CPI, which has urged it review to its decision. For all its Congress phobia, the irony is that the CPM’s best phase was under the leadership of its two most pragmatic bosses, Jyoti Basu and Harkishan Singh Surjeet, who always kept the communications line with the Congress open in pursuing the broader goal of containing the BJP. They put the demands of electoral politics above ideological fundamentalism.

With their departure, the party went into a steady decline which accelerated under Karat’s reign as the party chief. First, the 2011 rout in West Bengal; and then the annihilation in the 2014 General Election, which left it with only nine MPs. The question now is: how does the CPM plan to fight the BJP without help from the Congress?  Which are the other “secular and democratic forces” it has in mind?  The likes of the down-in-the-dumps and discredited Lalu Prasad Yadav and Mulayam Singh Yadav? Mayawati? Arvind Kejriwal? At a time when the Congress has at last started to show signs of a recovery, smart electoral tactics require all those serious about mounting a credible challenge to the BJP at the next elections to rally behind it. This is not the time for throwing vague ideological tantrums but for clever footwork. But even a casual observer can see that the party has no coherent strategy beyond brave rhetoric. Indeed, the entire Opposition seems to be in disarray just when, for the first time in the past four years, the BJP is looking vulnerable.

After the CPM’s “no-truck-with-Congress” verdict, a senior party leader was asked by journalists what was the plan now. He waffled: “Our effort will be to mobilise all the secular democratic forces and how that will be done will be decided at the time of elections.”

And when would that be? On the polling day when the BJP already has the elections in the bag?