MUMBAI: The Maharashtra Police have given actors Priyanka Chopra and Farhan Akhtar a warning for a scene in their upcoming film "The Sky Is Pink". 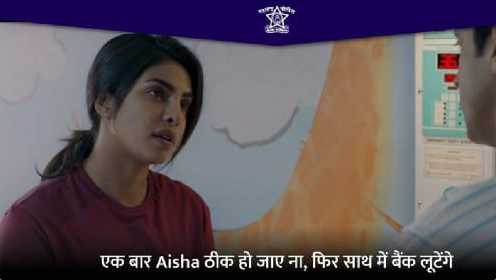 A still from the trailer of "The Sky Is Pink" film.

The Maharashtra Police have given actors Priyanka Chopra and Farhan Akhtar a warning for a scene in their upcoming film "The Sky Is Pink".

The trailer of "The Sky Is Pink" was unveiled on Monday and what caught the eye of Maharashtra Police was a dialogue in the film, where Priyanka's character tells Farhan's that they would rob a bank as soon as their daughter Aisha gets better.

Replying to Farhan's tweet, a post from the Maharashtra Police read: "A heist planned anywhere shall be punished with rigorous imprisonment for a term which may extend upto ten years and shall also be liable to fine, under Section 399  The best plan is always not to have such plans in 'real' life. #ReelvsReal." The trailer currently has over over 16,994,608 views on Youtube.

"The Sky Is Pink" is a love story of a couple, who lose their daughter to pulmonary fibrosis, a serious immune disease. It also stars Zaira Wasim.

Farhan tweeted: "Thank you for the crazy love you're showing the trailer of our film 'The Sky Is Pink'... big big hug." – IANS