Normal life thrown out of gear in Palampur 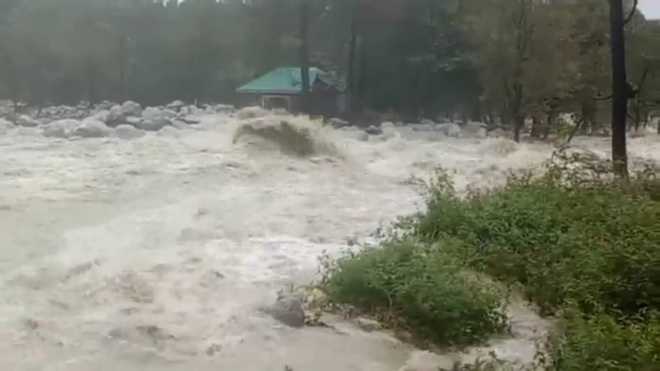 Normal life was paralysed here today following heavy rain in the past 24 hours. All rivers and streams are in spate.

Three employees of Om Power Project, who were stuck following a flood in the Neugal after cloudburst, were rescued. SDM Pankaj Sharma said as the administration received a message from the project authorities, a rescue team was pressed into service and after two hours, they were evacuated. He said many houses had been damaged but no loss of life was reported.

The SDM warned people, residing along the river, from venturing out because of more cloudbursts likely this evening. He said a control room had been set up in the DC office.

The flooded water of the Neugal entered Saurabh Van Vihar, damaging a portion of the tourist resort.

Roads, water supply and irrigation schemes suffered extensive damage. Besides, many parts of the region were without power following heavy damage to transmission lines.

Official sources told The Tribune that the roads were damaged in Palampur, Jaisinghpur and Baijnath. Several culverts had developed cracks and many internal roads were washed away. The IPH Department also suffered loss to its water supply schemes.

A Tribune team visited the rain-hit areas of Palampur. Government schools were closed. In many villages, parents did not send their wards to schools.