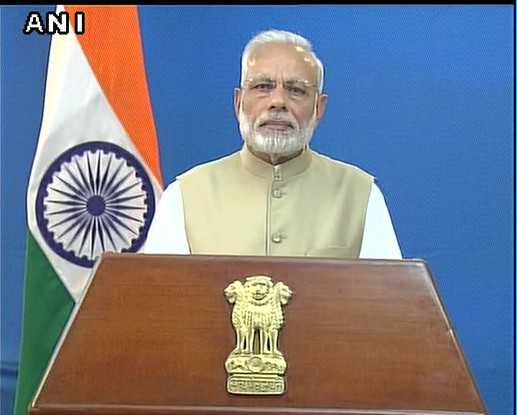 Aimed at eradicating black money and corruption in the country, Prime Minister Narendra Modi today announced that Rs 500 and Rs 1,000 notes ceased to be legal tender from November 8 midnight.

The Reserve Bank of India would issue new Rs 500 and Rs 2,000 notes in due course, he said in an emergency address to the nation, that was preceded by a meeting with top Cabinet Ministers, including the Home Minister and the Finance Minister and the National Security Adviser.

The last time India undertook such a measure was during the Janata Party government of Morarji Desai which did away with the Rs 1,000 note. It took at least two decades for the government to re-introduce currency of a higher denomination.

For those who have earned money legally, the old notes can be deposited in banks between November 10 and December 30 by producing PAN, Aadhaar or voter card. The money can then be withdrawn. The banks will limit the withdrawal transactions to Rs 10,000 per day and Rs 20,000 per week. The ATM withdrawal limit will be Rs 2,000. Banks will be closed tomorrow while ATMs will not function for two days. The old notes can also be converted through post offices and sub-post offices during the 50-day period.   On humanitarian grounds, the old notes will be accepted in hospitals, by the airlines and road and rail transport till November 11. Essential facilities, including crematoriums, will accept the old notes till the next three days.

The PM said when his government came to power, the country’s economy was floundering and now it was being seen as a bright spot by international institutions, including the International Monetary Fund. He said corruption and black money had made deep roots in the country and in global ranking, India was rated high.

Stating that specific classes of people, including those in high positions, were behind corruption and generation of black money, the PM said the common man was honest and hard working.

The PM cited several instances of an honest taxi or auto driver returning valuables to their customers and hoped people would contribute in this ‘mahayagya’ to tackle corruption and black money in the country.

Citing that corruption and terrorism were affecting the country's vitals, he said counterfeit currency was being pushed into the country from across the border to finance terror. Hawala was another form through which corruption and black money was being utilised to move such ill-gotten money. The government, he said, had taken several steps to tackle the menace and so far unearthed Rs 1.25 lakh crore.

Old currency notes can be deposited in banks between November 10 and December 30. Withdrawal transactions fixed at Rs 10,000 per day and Rs 20,000 per week. The ATM withdrawal limit has been fixed at Rs 2,000

Banks will be closed on Wednesday while ATMs will be shut for two days. Old notes can be deposited in post offices and sub-post offices during the 50-day period. There is no limit on the money deposited

Some concessions till Nov 11

On humanitarian grounds, old notes will be accepted in hospitals by the airlines and road and rail transport till November 11. Essential facilities, including crematoriums, will accept the old notes till the next three days

PM says specific classes of people, including those in high positions, are behind corruption and generation of black money and that the honest and hard working common man has nothing to fear

What it means for you

All coins and lower-denomination notes

What to do with existing currency

No cap on cashless transactions

This is a financial chaos and disaster let loose on the common man. It’s a heartless and ill-conceived blow to the common people and the middle class in the fake name of anti-corruption. — Mamata Banerjee, TMC chief

Modern-day Tughlaq has thrown a nuclear trident at poor people of India. Rs 1,000 of today is what Rs 100 was 20 years back. This is insanity. — Manish Tewari, Cong leader

Demonetising high denomination notes can be an effective means to check accumulation of wealth in cash. The government has taken a measure targeting the heart of the black cash economy. — Naushad Forbes, CII president