TURKEY:Turkish bombardment on Kurdish-controlled areas in northeastern Syria killed at least 15 people on Wednesday, eight of them civilians, a monitoring group said in an updated toll. 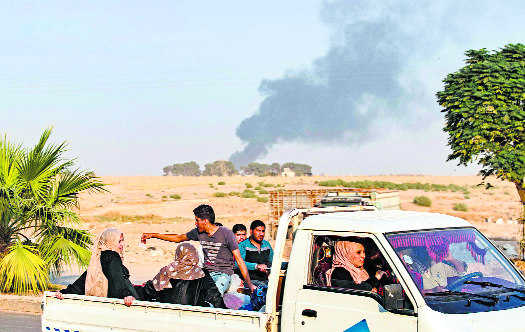 Turkish bombardment on Kurdish-controlled areas in northeastern Syria killed at least 15 people on Wednesday, eight of them civilians, a monitoring group said in an updated toll.

The Syrian Observatory for Human Rights said at least two of the civilian victims were killed in artillery strikes on the city of Qamishli.

Turkey launched its threatened offensive hours earlier, with a limited number of airstrikes and mostly artillery fire across most of the width of its long border with Kurdish-controlled regions of Syria.

Several large explosions rocked Ras al Ain, just across the border across from the Turkish town of Ceylanpinar, a CNN Turk reporter said, adding that the sound of planes could he heard above. Smoke was rising from buildings in Ras al Ain, he said.

The Britain-based Observatory, which has a vast network of sources across Syria, said more than 40 people had also been wounded in the early phase of the attack.

The Kurds, whose main militia is considered a terrorist organisation by Ankara, have vowed to resist any ground offensive and called on the population to mobilise.

The flat and open terrain favours Turkey’s vastly superior military however and the Kurdish forces have limited means to resist without the support of their US allies.

The offensive, which was widely condemned, comes three days after US President Donald Trump announced a US troop pullback from the border, effectively green-lighting a Turkish invasion.

President Tayyip Erdogan said the aim was to eliminate what he called a “terror corridor” on Turkey’s southern border. “Our mission is to prevent the creation of a terror corridor across our southern border, and to bring peace to the area,” Erdogan wrote, adding that the operation would target Kurdish militants and the Islamic State group (IS).

World powers fear the action could open a new chapter in Syria’s war and worsen regional turmoil. Ankara has said it intends to create a “safe zone” in order to return millions of refugees to Syrian soil. — Agencies