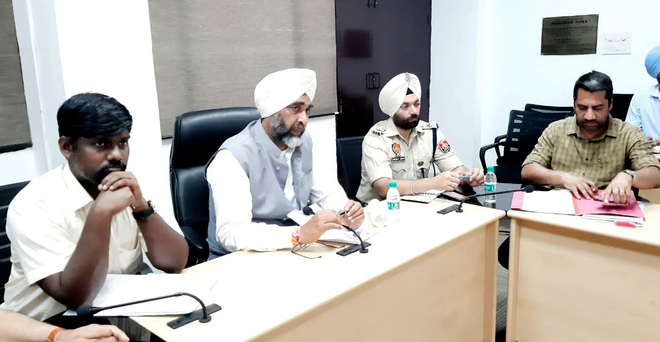 Finance Minister Manpreet Singh Badal at a meeting with officials of the district administration in Bathinda on Sunday. TRibune photo

Finance Minister Manpreet Singh Badal on Sunday said the state government had given districts Rs150 crore to combat Covid.He said in this time of crisis, the government was standing with the people of the state and all necessary arrangements had been made to provide adequate relief material to the needy. Manpreet said Rs50 crore had been given for purchasing medical equipment. He said as a precautionary measure, the Purchase Committee headed by the Additional Chief Secretary had been authorised to make all procurements related to Covid.

The Finance Minister said within a week, the districts would get all kinds of equipment and there would be no shortage of essential items.

Manpreet added that despite the Covid crisis, government employees would get full salary.

“We are fighting a war at the national level and no one should politicise it. Around 25,000 people are getting cooked food every day in Bathinda. Dry ration has been distributed among 7,900 people. In addition, 1,000 families, which were given a one-week ration seven days ago, received dry ration for a week on Sunday.

He said the purchasing time would be extended so that social distancing norm was followed in the markets.