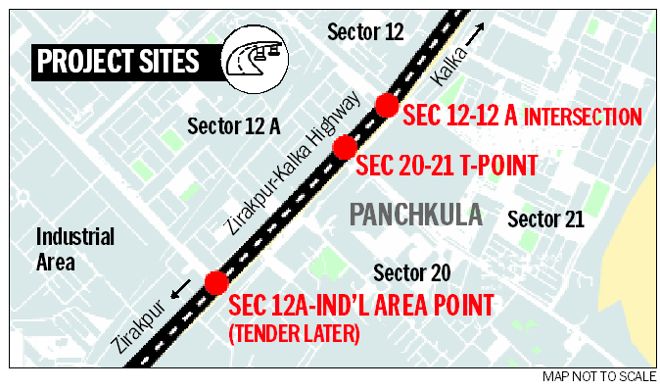 In a major relief to residents living across the Zirakpur-Kalka highway, the National Highways Authority of India (NHAI) will construct two bridges on the stretch at a cost of Rs 50 crore in a bid to ease traffic.

The bridges will come up at the Sectors 20-21 T-point and Sectors 12-12 A intersection to bring relief to the people from frequent snarl-ups.

The company to be allotted work will have to complete the project in 12 months and maintain it for a period of 10 years.

Besides, a bridge will also be built at the Sector 12A and Industrial Area point and a separate tender will be floated for the same by the NHAI later.

People from many sectors, including 20, 21, 12 and 12A have been facing difficulty crossing the highway owing to frequent snarl-ups on these sections.

Haryana Assembly Speaker and local MLA Gian Chand Gupta, who has been instrumental in getting the project sanctioned, had met Union Road Transport and Highways Minister Nitin Gadkari several times over past the seven years.

Gupta had taken up the matter with Chief Minister Manohar Lal, who further raised it with Gadkari during his visit to Sonepat in May.

With this, residents would not only get relief from rush hour traffic, but also have to travel a shorter distance from Sector 12 to 20 by 2 km.

Gupta said in 2009, the Kalka-Zirakpur National Highway was widened, but lack of planning at the time only aggravated the problems of people.