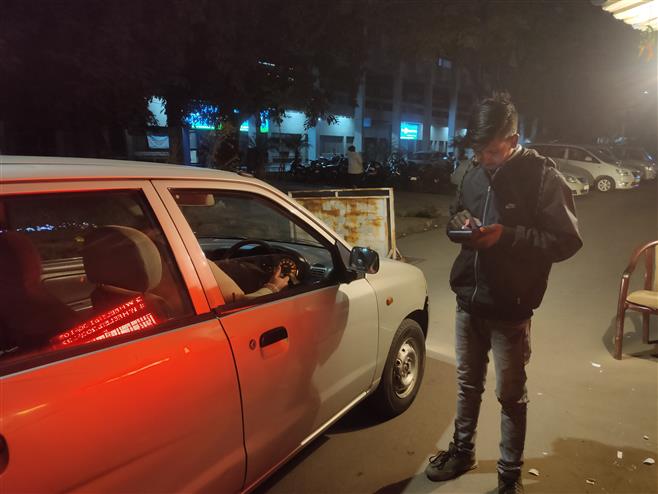 An attendant issues a parking slip at a Sector 34 paid parking lot in Chandigarh on Sunday. photo: Pradeep Tewari

Acceptance of lease agreement from a previous parking contractor by the city Municipal Corporation on a non-judicial stamp paper without ensuring its registry as a lease deed resulted in a revenue loss of Rs 29.66 lakh on account of stamp duty and registration fee, an audit report of the Comptroller and Auditor General (CAG) of India has said.

In June 2017, the civic body had granted a licence to operate and manage 25 paid parking lots and the Sector 17 multi-level parking to successful bidder Arya Toll Infra Limited, Mumbai, initially for a period of three years, extendable for further two years, for Rs 14.78 crore per annum.

Accordingly, an agreement was executed in June 2017 between the corporation and the firm. The audit noted the civic body accepted the instrument as agreement on non-judicial stamp paper of Rs 100, without ensuring the instrument was registered as a lease deed with the Sub-Registrar concerned.

Due to non-registration of lease deed by the licencee and acceptance of the same by the corporation, the government was deprived of stamp duty and registration fee of Rs 29.56 lakh and Rs 10,000, respectively.

After the matter was pointed out in February and June 2020, the corporation in January 2022 stated there was no fault on its part as it was the sole responsibility of the agency.

“The reply is not acceptable, as the lease agreement is a compulsorily registerable document under the Indian Registration Act and the corporation should have ensured the registration of lease deed/licence deed before accepting the same,” said the CAG report.

It further stated in a subsequent agreement on July 2021 concluded with another firm, stamp duty at the prescribed rate was paid by the agency while preparing the agreement with the corporation. The matter was referred to the Ministry of Home Affairs in January 2021 and a reply was awaited as of March 2022.