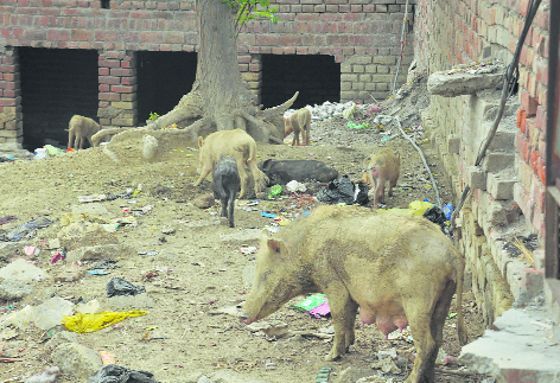 After samples of African swine fever (ASF) testing positive from a piggery farm at Bhurewala village of Naraingarh in Ambala, the district has been declared a “controlled area” and the Animal Husbandry and Dairying Department started the process for the culling of 600 pigs on Sunday.

The ASF is a highly contagious viral disease and has 100 per cent mortality rate. No pig products from the infected area are allowed to be sold in the market. Dr Prem Singh, Dy Director, Animal Husbandry & Dairying dept

As per a notification issued in this regard, under the Prevention and Control of Infectious and Contagious disease in Animals Act 2009, the Haryana Government had declared Ambala district as “controlled area” for the restriction of the movement of swine species within or outside the district and bordering states to prevent control and contain the ASF. All pig movement upon the declaration of the infected premises for the past 30 days should be traced back in order to identify the contaminated premises.

Deputy Director Animal Husbandry and Dairying Department Dr Prem Singh said, “Samples from a piggery farm were tested positive, following which the farm was sealed. There were around 600 pigs of different age groups and orders were given for the culling as per the guidelines of the National Action Plan. The pigs will be buried. There is only one farm there and 1-km radius from the infected area has been declared as infected zone, while the area of 10-km has been declared as surveillance zone.”

“The culling will be done in a phased manner and the process is likely to take four to five days. The ASF is a highly contagious viral disease and has 100 per cent mortality rate. No pig products from the infected area are allowed to be sold in the market as the virus is highly resistant in environment. No other complaints of deaths and infected animals have been reported from any other farm in the district,” he added.

To a query he said, “There have been reports of the ASF in Punjab, so there is the possibility that some person may have visited the infected area in Punjab and then visited here. However, the exact history is being traced. The situation is under control and three teams have been constituted in the district for the infected zone, surveillance zone and the free zone for the control and prevention of the disease.”

Sources said there were 6,969 pigs in the district, including the 600 pigs to be culled.