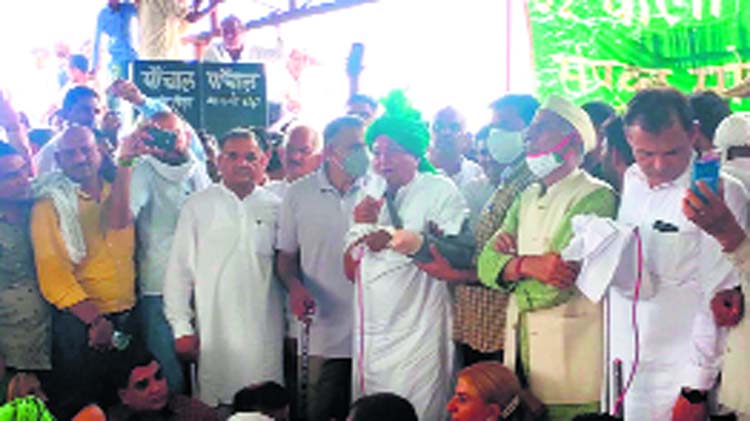 A large number of supporters had arrived at the protest site to listen to the 86-year-old INLD leader, who used the occasion to gun for the government and announce his arrival on the political scene.

Clad in his trademark dhoti-kurta and green turban and appearing a bit frail, the veteran leader spoke for about half an hour, extending support to the movement of the farmers against the farm laws and targeting the alleged failures of the government.

Lambasting the policies and programmes of the BJP government, Chautala, who served a jail term for over nine years in connection with the JBT scam, promised to “expose the failures of the ruling government to ensure its exit in the next elections”.

Amid chants of “Chautala zindabad” and “kisan ekta zindabad” and thunderous applause by protesters, he took on the “anti-farmer” government for its inability to resolve the matter over the past eight months. He said the farm laws were “black laws” that were aimed at destroying the farmers and the agriculture sector as the government wanted to allegedly hand over the farm sector to corporates.

Alleging that the farmers’ interests had been ignored in the past seven years, he said the three laws would go as soon as the government was replaced. Appealing to the people to reject the BJP, he said he would tour villages to expose the government.

While Chautala’s younger son Abhay Chautala had resigned from the Haryana state Assembly in protest against the farm laws, his grandson and Deputy Chief Minister Dushyant Chautala’s JJP is part of the coalition government, which supports the laws.

Rattan Singh Sorot, leader of the Bharatiya Kisan Union, meanwhile, said Chautala’s arrival and support had provided a new energy to the stir.