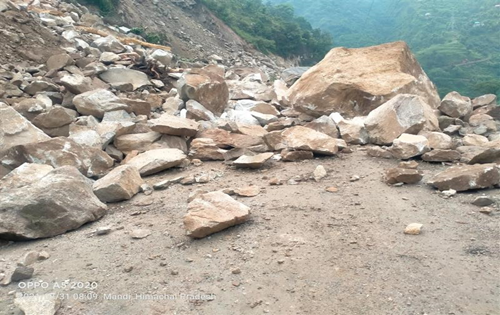 The BRO has been tasked with restoring the strategic Manali-Leh highway that has been blocked due to landslides and rescuing stranded civilians. file photo

Two Border Roads Organisation (BRO) officials have died during rescue and relief operations in Himachal Pradesh, which is witnessing flash floods and landslides due to heavy rainfall. The BRO has been tasked with restoring the strategic Manali-Leh highway that has been blocked due to landslides and rescuing stranded civilians.

Mandi: The NHAI on Saturday restored the Chandigarh-Manali highway, which was blocked due to a massive landslide near Pandoh in Mandi district on Friday. Three vehicles were damaged in the incident. A large number of tourists were stranded in the area. The police diverted small vehicles onto alternative routes between Mandi and Kullu, while buses and trucks remained stuck in the area until the highway was restored. TNS

A number of civilians, including women and children, were stranded at a road stretch near Sarchu ahead of Baralacha La (a 16,040 feet high pass) on the Manali-Leh highway, and facing problems due to the lack of oxygen in inclement high-altitude conditions. The BRO team cleared the landslide at 14,480 ft and rescued them. Sarchu is at the boundary of Himachal Pradesh on the Ladakh side.

Naik Reetesh Kumar Pal, who was part of the rescue efforts, lost his life. The road was later restored to traffic, the Union Ministry of Defence said on Saturday.

On July 27, the BRO cleared a stretch on the Killer-Thirot-Tandi road that connects Himachal Pradesh with Kishtwar in Jammu and Kashmir. Two passenger vehicles were stranded in the area. During the operation, some members of the BRO team, six civilians and a civilian vehicle were washed away in a sudden flash flood. Junior Engineer Rahul Kumar died in the incident, while BRO personnel rescued others, the MoD said.