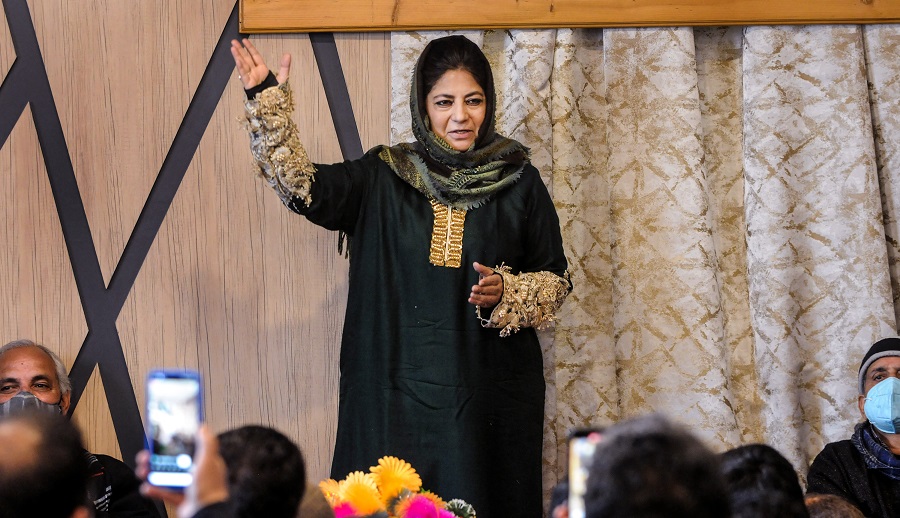 Former Jammu and Kashmir Chief Minister Mehbooba Mufti was on Monday unanimously re-elected as president of the PDP for a three-year term.

Mufti's name was proposed by senior leader Ghulam Nabi Lone Hanjura and seconded by Khurshid Alam, a party spokesperson said after the election.

Senior PDP leader Abdul Rehman Veeri was the chairman of party election board, he said.

The spokesperson said the party's electoral college in Jammu had earlier unanimously re-elected Mufti as the party chief.

Senior leader Surinder Chaudhary was the returning officer for the election.

Talking to reporters, Mufti said Jammu and Kashmir was going through tough times and she will continue to lead the PDP on the mission for which it was established.

"The PDP was established for raising the voice of the people and problems they face. We will continue to do that," she said.

In response to a question, the PDP president said, "If they (police) think that I should be arrested for fighting for peoples' rights, let them do their duty. I will continue to do my work."

Asked about restoration of statehood to Jammu and Kashmir, Mufti said, "It is not for me to decide. The Centre has to restore it."

The Peoples Democratic Party (PDP) was formed in 1998 by Mufti Mohammad Sayeed as a regional alternative to the National Conference.

The party grew from strength to strength during the last two decades with many political stalwarts joining it. Several technocrats and bureaucrats, after retiring from service, also joined the PDP over the years. However, the party was on the verge of split after the PDP-BJP coalition government in Jammu and Kashmir fell in June 2018.

While Mufti has managed to retain the grip over the party, most of the prominent leaders, including some founding members, have left over the last two years. PTI