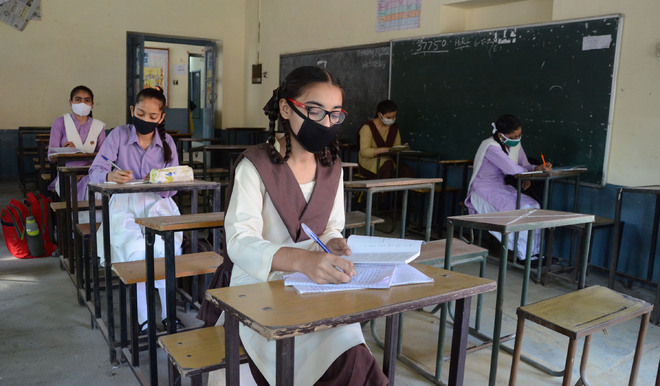 A whopping 1,100 new students took admission to Nehru Garden Girls Senior Secondary School in Jalandhar, a prestigious government school with an illustrious past.

Even as only 30 students turned up on the first day as the school re-opened after six months on October 19, the overall strength has increased to a record 2,830.

Of the 1,100 new students, 800 are from private schools. Thanks to the exodus of students from private schools, government schools are again witnessing a golden period, the likes of which they saw over a decade ago. While the district saw 10 per cent attendance in schools on the first day, it witnessed a huge surge in admissions during Covid. Many prestigious government schools are witnessing a record increase in admissions. The illustrious trio of Nehru Garden school, Junior Model and Senior Model Government Secondary Schools in Jalandhar, have seen the biggest spike. As many as 30 schools in Jalandhar now have an increased strength of 900 to 1,000 students. The strength at Nehru Garden stands at a whopping 2,830 today.

Junior Model has a strength of 1,515 (464 new admissions, over 350 from private schools) and Senior Model’s strength is 805 (200 new admissions, 175 from private). Other secondary schools witnessing huge spikes include those at Jamsher and Mithapur, among others. Academicians opine that the pandemic had provided visibility and numbers to government education like never before.

While the student presence is dwindling after the opening day (Nehru Garden today saw only 19 students), principals said it could be due to the festival season.

Gurinderjit Kaur, principal, Nehru Garden Girls Senior Secondary School, said: “In 2010 when I joined, the school had mere 1,734 students. Even in the golden era of education, the school had a strength of 1,800. We had 2,559 students last year, this year they have risen to 2,830. At least 800 of the 1,100 new admissions are those who quit private schools. This, despite the 850 outgoing students of Class XII. The attendance was less but we hope it will pick up. The pandemic has indeed played a huge role. Sadly, many students report that their families can’t afford private education anymore.”

Harinder Pal, DEO (secondary), said: “While 10 per cent students across classes IX to XII turned up on the first day of school, the number might increase in the coming days. Across Doaba, there has been about 11 per cent increase in admissions. In Jalandhar too, there has been 10.89 per cent increase. The brilliant Class XII results this year and students’ exodus from private schools have both played a role in the spike in admissions. A majority of admissions are being witnessed in cluster of urban schools in Jalandhar.”