OTT platforms are set to offer a great mix of entertainment 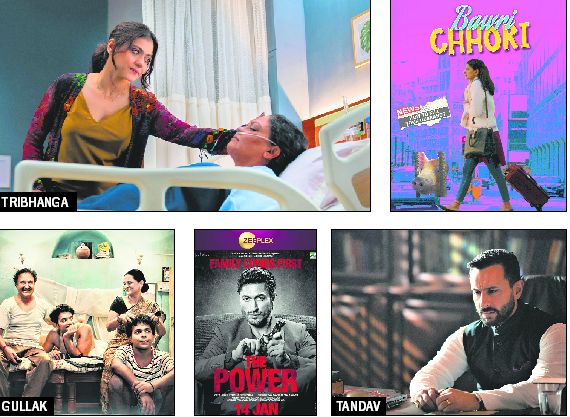 Helmed by Akhilesh Jaiswal, Bawri Chhori features Aahana Kumara, Rumana Molla, Vikram Koccher and Niki Walia among others. The film narrates the story of a girl searching for her husband in London, who had left her soon after their marriage.

January 14: The Power on ZeePlex

Vidyut Jammwal and Shruti Haasan-starrer thriller The Power revolves around hatred, love and revenge. Set in the backdrop of the 90s, the story showcases the journey of two lovers who get entangled in a family feud.

Tribhanga, which marks Kajol’s digital debut on the world of web, narrates the story of three generations of the same family, from the late 1980s to the present day. Directed by Renuka Shahane, the film’s synopsis reads, “Tribhanga is an Odissi dance pose that is asymmetrical, yet mesmerising and sensuous, so much like the lives of the three women characters of the film.” It also stars Mithila Palkar, Tanvi Azmi and Kunaal Roy Kapoor.

Ali Abbas Zafar’s political drama Tandav stars Saif Ali Khan in the lead role. The web series also stars Dimple Kapadia, Mohammed Zeeshan Ayyub, Kritika Kamra, Amyra Dastur, Kumud Mishra and Sunil Grover among others. The series is said to take viewers inside the closed, chaotic corridors of power and uncover the manipulations, charades as well as the dark secrets of people who will go to any length for power.

Narrated from the perspective of a Gullak (piggy bank), Gullak explores the imperfect relationships and aspirations of the Mishra family. It narrates anecdotes from their lives in an unconventional manner. The show features Jameel Khan, Geetanjali Kulkarni and Sunita Rajwar.