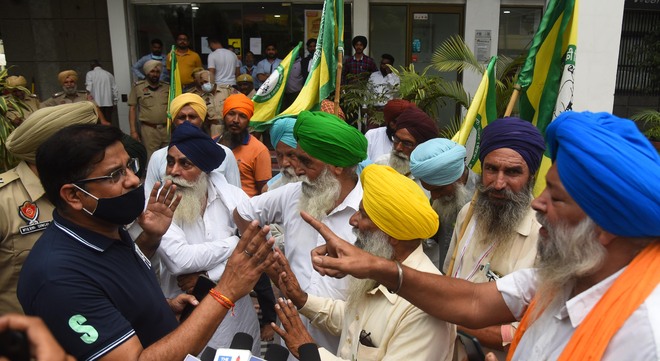 Dairy farmers, under the banner of the BKU-Ekta Ugrahan, stage a dharna in Ludhiana on Thursday. Tribune photo: Himanshu Mahajan

To protest against the non-payment of subsidy and harassment of dairy farmers by private and public sector banks, a large number of farmers and dairy farmers today staged a dharna at Feroze Gandhi Market branch of the ICICI Bank, under the banner of Bhartiya Kisan Union – Ekta Ugrahan (BKU).

Sudagar Singh Ghudani, BKU general secretary, led the protest. He lamented that in many cases of dairy loans, the farmers had paid all instalments but due to non-payment of subsidy by the state government, the bankers were harassing them for payment of the balance amount. “For no fault of theirs and solely due to the delay on part of the authorities concerned in releasing the promised subsidy amount, the dairy farmers are being termed defaulters,” he rued.

Citing examples, he said several dairy farmers of Jargari village in the district had approached the BKU to complain about the delay in payment of subsidy. There must be thousands of such dairy farmers in other parts of the state who had availed bank loans under subsidy scheme for diversification and adopting allied professions. However, the government apathy had come as a wet blanket on the diversification plans and dairy farmers were made to suffer at the hands of the banks, he added.

The affected farmers asserted that the government should make necessary arrangements for timely payment of all subsidies to the farmers, dairy farmers and others who had taken up allied professions because the subsidy amount was calculated towards overall cost of production. Non-payment of subsidy was a betrayal of the farmers and such policies would discourage any further diversification of agriculture.

Meanwhile, bank officials assured the protesting farmers that they would ascertain the status of balance susbsidies of all outstanding dairy loans by September 30 and further decision in this regard would be taken thereafter. In the meantime, there would be no harassment of farmers for repayment.