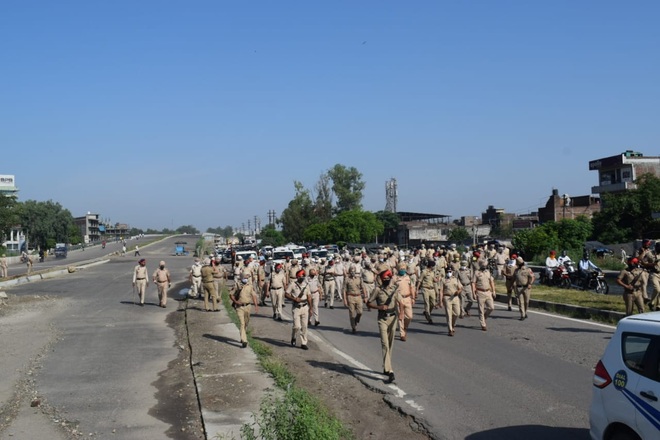 The police take out a flag march at Dhandari Kalan where migrants blocked NH-44, in Ludhiana on Monday. Tribune photo

As hundreds of irate migrant workers blocked National Highway 44 at Dhandari here last evening and created a ruckus over failure of the authorities to provide food/ration to them, it came as a huge embarrassment for the ruling party and the administration in the backdrop of tall claims with regard to reaching out to the poor and needy.

The slogan-raising migrants were not only upset over denial of ration to them promised by the state government but they also blamed the administration for not making transport arrangement to shift them to their native places if they could not be fed during lockdown imposed in the wake of threat posed by Covid-19.

Several well-meaning city residents felt that the unsavoury incident aptly displayed the worst kind of trust-deficit among the migrants even after having spent decades in the city and making significant contribution to all sectors of economy.

“The hungry and frustrated lot of migrants – with no resources and nobody to lean onto, taking to street was waiting to happen and the ticking time bomb could have detonated at any time,” were the remarks of a migrant leader from the city who claimed that there was a palpable sense of fear and insecurity among them (the migrants) after the political leadership, their employers and the administration had failed them in providing food and shelter during the period of lockdown.

The irony of the situation, remarked another migrant settled in the city for the past over 15 years, was that even if there was no dearth of essential commodities and food items, the political leaders and the administration had miserably failed to put a proper system in place which could ensure that none would sleep hungry. “This is the sole reason that a large number of migrants – equally scared of Corona virus and hunger, longed to travel back to their native places.”

Another migrant, a motor mechanic and native of Basti in Uttar Pradesh, said this city had given them a lot. But unfortunately, in the time of crisis, nobody was in sight to lend a helping hand.

A city resident, Col Iqbal Singh, asserted that from the very beginning, ration distribution among the poor should have been on the basis of Aadhaar Card and no voter cards ought to have been demanded as was reported from some parts of the city.

Meanwhile, Ludhiana Police Commissioner Rakesh Agrawal said a flag march was conducted in Dhandari and adjoining areas today under the supervision of DCP/HQ Akhil Chaudhary, along with ADCP-2 Jaskiranjit Singh Teja and ADCP-4 Ajinder Singh, for maintaining law and order in the respective areas and express solidarity with the police force guarding the people in these difficult times in the wake of the Covid-19.

Matter of running trains for transportation of the migrants to their native places was also being taken up with the government at the appropriate level, said the top cop.