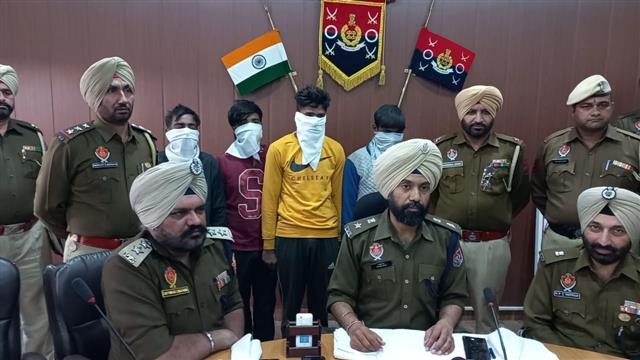 The Ludhiana rural police today busted two gangs of robbers and arrested seven of them. The police also recovered five two-wheelers and six mobile phones from the gang members.

Senior Superintendent of Police (SSP), Ludhiana rural, Harjeet Singh conducted a press conference in this regard on Wednesday.

The SSP said Ram Lakhan of Jagraon had submitted a complaint to the Jagraon police that on November 11 when he was heading home, he was cornered by four motorcycle-borne persons who attacked him with sharp weapons and then snatched Rs 600 in cash and a mobile phone from him.

The SSP added that when the Jagraon police started a probe into the incident, four persons were identified and arrested. They were identified as Sunny Singh, alias Jam, Markas, Sunny Singh and Ranjit Singh, all residents of Jagraon. The police recovered six mobile phones and sharp weapons from the gang members.

The police said the suspects had also sold looted mobile phones to some persons and the buyers of the phones were being identified to recover the same.

In another case, the rural police nabbed three members of a vehicle thieves’ gang and recovered five two-wheelers from them. The suspects are Lovepreet Lovi, Jaswant Singh and Manpreet Singh, the SSP said, adding that the gang had been stealing two-wheelers from the Jagraon area for long and they had also sold some stolen vehicles which would now be recovered from buyers. The SSP revealed that now, the police remand of the gang members would be sought from court so that in further interrogation more members of the gangs could be nabbed and more looted and stolen vehicles could be recovered.