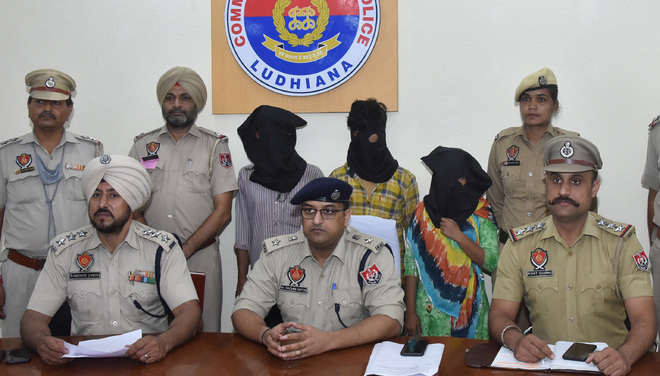 Joint Commissioner of Police (Rural) Dr Sachin Gupta addresses the media after the arrest of the murder accused in Ludhiana on Thursday. Tribune photo: Himanshu Mahajan

Extramarital relations of a migrant woman with two of her neighbours allegedly led to murder of her husband some 10 days ago, which was initially considered as a natural death. However, after intensive investigation, the police cracked the case and the woman and her two paramours have been arrested and charged under Sections 302, 201 and 34 of the IPC for killing Ram Lagan (32), resident of Lamti Okraha, under Manakpur police station, Gonda district, Uttar Pradesh.

Preliminary interrogation of Manisha and other persons had revealed that the woman, mother of three children (two sons and a daughter), had developed illicit relations with Ramesh and Ansari, who were living in the neighbourhood, and about seven months ago, she had left her house along with her children to live with one of the two paramours.

“Though Manisha had come back home but she was not happy with her husband, who suspected her fidelity and used to admonish her. All three accused persons hatched a conspiracy and on September 20 at around 8.30 pm Ramesh and Ansari consumed liquor with Ram Lagan and thereafter took him to a canal, where Ram Lagan was hacked to death with a knife. Ramesh and Ansari threw the body in the adjoining bushes and his bicycle into the canal,” said police officials.

On September 22, Sandeep, also a migrant from Uttar Pradesh and presently residing on Gill Road here and cousin of deceased Ram Lagan, intimated the police that they had discovered Ram Lagan’s body in a mutilated condition from near the canal. At that time, the police initiated proceedings under Section 174 (natural death) of the IPC and after post-mortem the body was handed over to the family.

However, on another complaint received from Bechan Ram, brother of Ram Lagan, who suspected foul play in the death of his brother, the police launched investigation and ultimately nabbed the trio.