Aryan is regular consumer of drugs, says NCB; court to pass order on bail on October 20 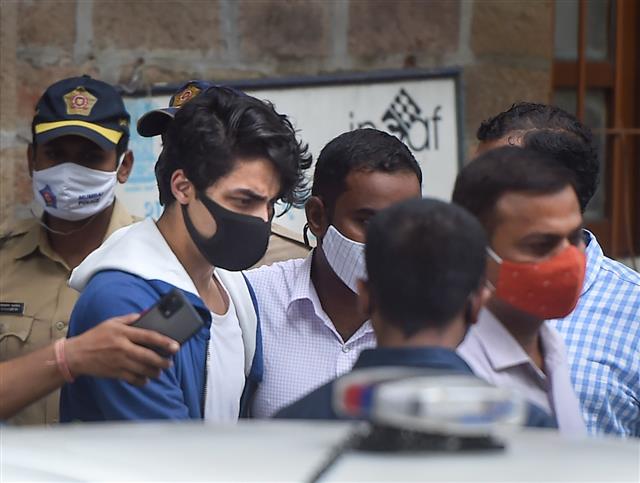 Aryan Khan, son of Bollywood actor Shah Rukh Khan, was a regular consumer of drugs, the NCB on Thursday told a special NDPS court here while opposing his bail plea in a case of alleged seizure of banned drugs from a cruise ship.

Aryan (23), arrested by the Narcotics Control Bureau (NCB) on October 3, will have to remain in jail for at least six more days as the court, after hearing arguments, posted the matter for orders on October 20.

Khan and two others—Arbaaz Merchant and Munmun Dhamecha—have sought bail from the court of VV Patil, special judge for cases under the Narcotic Drugs and Psychotropic Substances Act.

Appearing for the NCB, Additional Solicitor General (ASG) Anil Singh claimed that there was evidence to show that Aryan Khan was a regular consumer of drugs for the last few years.

He also reiterated the charge of conspiracy against Aryan, based on his WhatsApp chats.

Since his arrest, the NCB has maintained that though nothing was recovered from him personally, Aryan’s WhatsApp chats revealed his links with drug peddlers.

The ASG further contended that drugs were seized from Merchant at the docks, and they were meant for consumption by both Aryan and him.

The NCB has also been claiming that Aryan was in contact with members of an international drug racket.

The NCB was in touch with the External Affairs Ministry to identify them, the ASG said.

Singh also cited a high court ruling in another case that if an accused is shown to be in touch with drug dealers, bail cannot be granted even though there is no drug recovery.

Drug abuse is affecting youngsters, and being college-going boys should not be a consideration for bail, the NCB lawyer said, adding that the future of the country depends on this generation.

“This is not what our freedom-fighters had in mind. This is the land of Mahatma Gandhi and Buddha. The investigation is at preliminary stage, this is not the stage for grant of bail,” he added.

Senior Advocate Amit Desai, representing Aryan Khan, said the NCB was pointing to international trafficking racket, but if the consumer states from where he procured drugs, then “the chain is complete”.

The NCB itself had alleged that Aryan disclosed the name of Achit Kumar, another arrested accused, he said. The agency can continue the probe, but the allegation of links to international racket against Aryan is “inherently absurd and false”, he said.

“I don’t think there can be a debate that the entire world is fighting the drug menace. We got our freedom and we must protect it and save the younger generation from the drug menace,” the lawyer said.

On Aryan’s WhatsApp chats, Desai said today’s youth have different ways of expressing themselves which might be a “torture” for the older generation.

The language could seem like something different than what ought to be (expected) in a court of law and might lead to suspicion, advocate Desai said.

“These are private moments which are being investigated. You can go ahead and investigate...But it has nothing to do with illicit behaviour, illicit drug trafficking,” he added.

Aryan Khan had lived abroad for some time, and lot of things are “legitimate” in other countries, the lawyer added.

Earlier, Aryan, Arbaaz Merchant and Munmun Dhamecha, who were among those arrested by the NCB on October 3, had been denied bail by a magistrate’s court which said it cannot hear the pleas in a case triable by a special NDPS court.

While Aryan and Merchant are lodged at Arthur Road jail, Dhamecha is at Byculla women’s prison in the city.

Based on a tip-off that a rave party was scheduled on the ship off the Mumbai coast, an NCB team, led by its zonal director Sameer Wankhede, raided the Goa-bound Cordelia cruise on October 2  evening and allegedly seized drugs. —PTI