India to battle Covid with SCO members, Russia and China : The Tribune India

India to battle Covid with SCO members, Russia and China 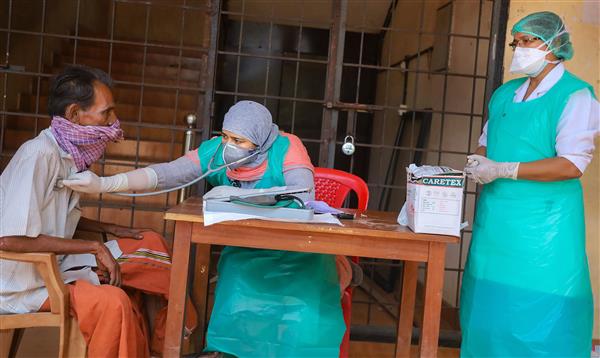 Doctors examine a patient at a rehabilitation camp during the nationwide lockdown in the wake of the coronavirus outbreak, in Kozhikode. PTI

After having initiated coordination within the SAARC neighbourhood, India will be looking to utilise the upcoming virtual summit of the Shanghai Cooperation Organisation (SCO) to further streamline the fight against Covid on a wider regional scale.

The first SCO summit via teleconferencing will be attended by the likes of Vladimir Putin, Xi Jinping, Narendra Modi, Imran Khan and heads of four Central Asian countries all of which are in the grip of Covid in varying degrees.

For an organisation that covers three-fifths of the Eurasian continent and nearly half of the human population, sources expect SCO to contribute more significantly than SAARC to information sharing, exchanging best practices and smoothening out medical aid bottlenecks because of the presence of world’s three major net providers of pharmaceuticals, medical expertise and equipment in India, Russia and China, respectively.

Sources did not expect the current deep freeze in India-Pakistan ties to be an inhibiting factor for Islamabad’s participation.

In case of the SAARC virtual summit, Pakistan had opted to depute a junior official to attend a virtual summit that had heads of government of all other SAARC members.

But in case of SCO, Pakistan has no such qualms. Sources pointed out that Indian Army’s general rank officer had attended the SCO working group meeting of defence and security experts in Islamabad in late February.

This SCO virtual summit will hold more promise because it will be in an expanded format. Thus not just SCO part-timers like Iran and Afghanistan, also in need of succour from the epidemic, but others such as the World Health Organisation will also be invited to participate.

Nepal, which by right should join SCO as it is sandwiched between two members, Russia and India, may also get invited, thus brightening its chances of becoming a regular participant.

For most countries, including India which has recently borrowed from the World Bank and the IMF, the SCO’s ability to provide a coordinated fiscal stimulus to the region is of great attraction.

Sources said China has already offered to provide funds from the Asian Infrastructure Investment Bank (AIIB) if members came up with specific action plans on macroeconomic measures that have participation from the concerned country’s developmental financial institution.

SCO is among the few regional organisations that had factored in pandemic as a threat to the existing order.

In June 2018, the heads of the SCO countries had issued a statement on joint efforts against the threat of epidemics in SCO.

And in December 2019, it resolved to regularly hold exercises to identify and learn to respond to sanitary and epidemiological emergencies, including by using mobile laboratories.

Bulandshahar resident booked in a case being probed by NIA a...