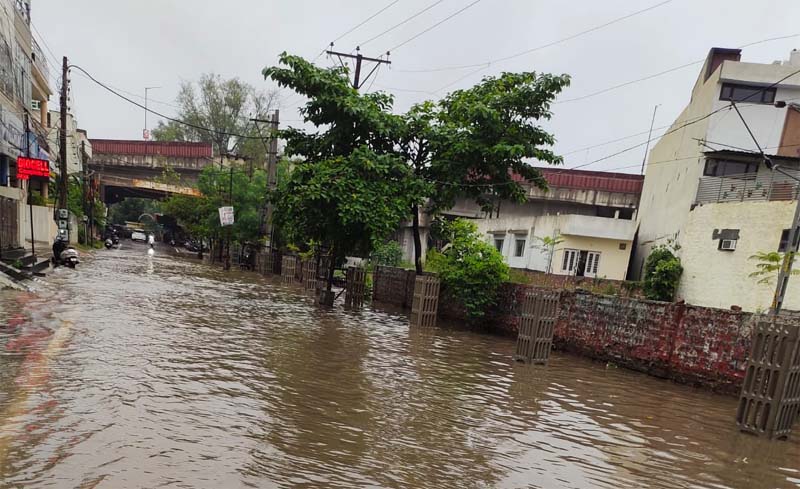 An inundated road near Railway Crossing No. 21 in Patiala on Monday. Tribune photo: Rajesh Sachar

The city received incessant rainfall today morning submerging various roads and inconveniencing residents and commuters. Residents claimed, “The condition of sewerage system has not improved since 1993 when the city was hit by floods.”

The state government spent crores on development projects, but failed to solve basic problem of city’s sewerage system, they added.

While explaining the condition of road Simar, a resident of a colony adjoining railway crossing No. 21, said, “The Municipal Corporation had removed previously laid cement sewage pipes and installed new plastic ones on the road adjoining Railway Crossing No. 21 and 22 recently. The issue of drainage of rainwater here is same as before. Only money has been spent in the name of development.”

Water also accumulated on road where interlocking tiles were laid near the Kadahwala chowk. Manjit Singh, a shopkeeper said, “Earlier, there was no issue, but after new interlocking tiles were laid three months ago it has become rather difficult here. The road is not levelled. The Corporation is sending workers to open manhole covers to drain rainwater whose level rises up to nine inches.”

Residents of Jejian Muhalla said sewer in the area gets blocked. Chhotu Ram, a muhalla resident said, “Earlier, when new sewer lines were not laid the rainwater flow was proper. Now, new sewer lines have been laid, which get blocked due to a bend. Despite requests and complaints regarding accumulation of rainwater civic body officials do not come here.”

Meanwhile, a local leader and former councillor went around the city on a bicycle. Standing in knee-deep water near the Dhobi Ghat area he said, “The government has spent huge amount on laying tiles all across the city, but failed to solve sewerage problems. The condition of sewerage system is getting worse with each passing day. It’s akin to that of 27 years ago when the city was hit by floods,” he added.

“The Corporation has kept large size flower pots in the Ragho Majra area, but plants in most of them are missing,” he said. “Many flower pots have already broken. This is wastage of public funds,” he added.

Problems in Jejian Muhalla adjoining the Kadahwala chowk are same as these were years ago. Bhag Kaur, an elderly woman, who came to the city as a little girl during the country’s Partition said, “The waterlogging problem has not been solved in our area. The MC has installed interlocking tiles here recently, but the issue of water accumulation still persists.”

“Water entered our houses during 1993 floods. Today, the condition is nearly the same. The only improvement is that rainwater does not enter houses, but its level rises up nine inches on the road,” she added.

Talking about waterlogging in the city Municipal Corporation Joint Commissioner Lal Vishwas said, “We have asked all our workers to drain accumulated water in the city. Besides, water has already receded from most areas.”

Giving more information about works carried out in the city the MC Superintending Engineer, Sham Lal Gupta, said, “The problem at the Kadahwala chowk is not as worse as it was earlier. Moreover, we are facing waterlogging issue as the cleaning of the sewerage system has been delayed.”

“The Municipal Corporation will check waterlogging issues at Jejian Muhalla,” he added.