It’s April in Paris, but French told to stay indoors 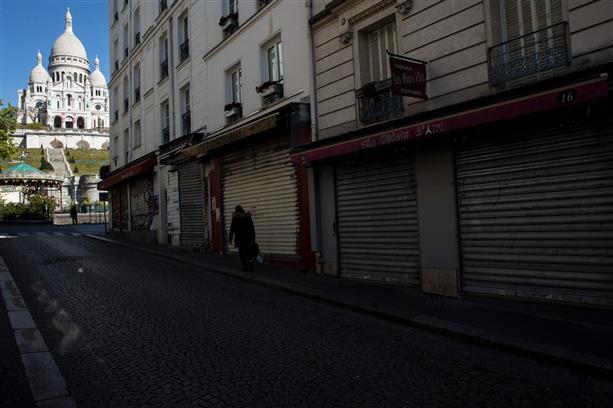 A woman walks in the streets, as the Sacre Coeur Basilica is seen on the background, in Montmartre in Paris. AFP

Parisians have been warned not to succumb to the tempting sunny spring weather and to remain indoors to help fight the spread of the coronavirus that has killed 7,560 in France.

France, like other countries, has confined its residents to home since March 17 to curb the spread of the virus.

The measures have been extended until April 15, and are likely to be extended again.

Several guests on Sunday televisions shows, including doctors, were alarmed by images of many Parisians out and about along the banks of the river Seine and on car-less streets and sidewalks, jogging, strolling and enjoying the sunny weather.

The situation is still too serious in Paris to start thinking of lifting the confinement, Rottner’s counterpart Valerie Pecresse, head of the greater Paris region, said on the same channel.

“Do not cede to the temptation, even if it is the holidays and the weather is good. Stay at home as much as possible,” she said.

“Our health system is saturated, nothing would be worse than a semi-confinement.”

Two high-speed TGV trains transferred a new batch of patients needing intensive care from the Paris region to hospitals in Brittany on Sunday to ease the pressure on healthcare facilities that have been overwhelmed by the epidemic.

The director general of France’s health ministry Jerome Salomon said in a daily briefing on Saturday that 566 patients have been moved across various regions of France to ease the pressure on areas that have been badly hit by the outbreak.

France had a total of 89,953 confirmed or suspected cases in hospitals and nursing homes as of Saturday, according to health ministry data. Reuters

21 hours ago
9
Himachal What our readers say