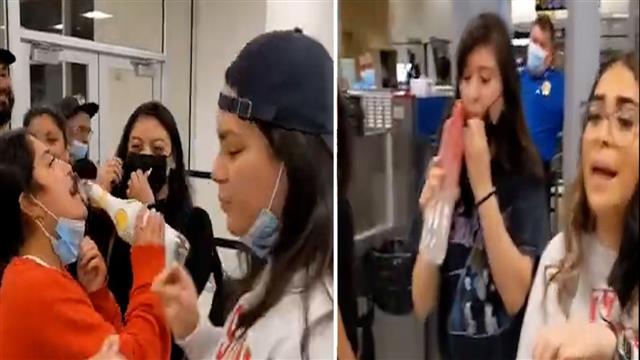 Two Miami-based women offered free vodka shots to passengers at the airport after they were stopped from taking them inside at the time of check-in.

A video showed the women giving vodka shots to people waiting in a queue.

The video was has gone insanely viral and has been widely shared by online users who have been posting hilarious comments about the incident.

The video was first shared by a  TikTok user @latinnbella who said that they were heading to Miami in Florida.

The two women were reportedly carrying two big bottles of alcohol. However, it seems that they had forgotten the 100 ml rules for carrying alcohol, which has been in place for years.

In the viral video, one woman can be seen drinking a bottle of Ciroc vodka, while the other passes a bottle of pineapple Malibu rum to others. The sight of two women distributing free vodka shots to passengers left the security staff in splits.

They didn't let us take our bottles through check-in so we gave shots to everyone in line," the TikTok user captioned the video. The two women were heard saying that they didn't want the two alcohol bottles "to go to waste."

The video has evoked a mixed response from users with amny hailing the women as heroes, others looked a little upset.

One user said, "I can't believe they are allowing this type of behaviour at the airport and I'm even more disappointed I wasn't there to participate." Another wrote, "Heroes don't always wear caps."

Another user commented, "This is about to be the most lit plane ride. Y'all have a party group already." Yet another added, "The fact they are taking off their masks to drink from the same bottle. I guess alcohol sanitises everything."

The TikTok user later posted a second video to update that they had safely landed in Miami.