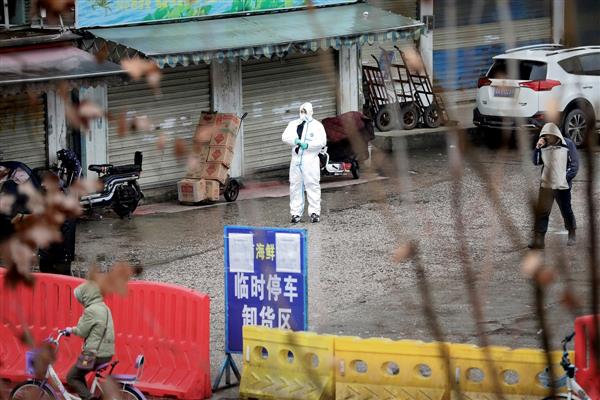 A worker in a protective suit is seen at the closed seafood market in Wuhan, Hubei province, China. Reuters/file

Markets in China's Wuhan sold dozens of wild animals that can host pathogens and potentially jump to humans, two years before the Covid pandemic hit the world, according to a study.

The study was led by an international team of researchers from China West Normal University in China, Oxford University in the UK and the University of British Columbia in Canada.

In the study, published in the journal Scientific Reports, the researchers document 47,381 animals across 38 species, including 31 protected species sold between May 2017 and November 2019 in Wuhan's markets.

Of these, 33 have been reportedly infected with zoonotic pathogens in wild populations, markets and/or farms in China since 2009, the findings showed.

Further, the researchers found sales in Wuhan of mink, palm civets and raccoon dogs, but they did not find sales of pangolins or bats. The masked palm civet (Paguma larvata) was the host involved in the 2003 SARS outbreak.

Bats have been suspected as possible sources of the infectious coronavirus disease, which has so far claimed 37.6 lakh lives.

"...the species that were traded are capable of hosting a wide range of infectious zoonotic diseases or disease-baring parasites, aside from Covid-19. These range from potentially lethal viruses, for example, rabies, SFTS, H5N1, to common bacterial infections that, nevertheless, represent a risk to human health (eg, Streptococcus)," the researchers wrote.

The Chinese government had on January 26, 2020 temporarily banned all wildlife trade until the Cviod-19 pandemic concluded. It also permanently banned eating and trading terrestrial wild (non-livestock) animals for food from February, last year.

Early this year, the World Health Organization (WHO), examined the role of China in the origins of Covid pandemic. The experts tried to retrospectively ascertain what wildlife was being sold in local wet markets in this region. Their findings were inconclusive, with markets having been closed down completely at that point for four months.

Various scientists and experts from across the globe have piled up circumstantial evidence pointing to the theory that the coronavirus may have leaked from the Wuhan Institute of Virology (WIV) in China.

The US President Joe Biden has, last month, ordered the intelligence community to re-double efforts to examine how the virus originated, including the lab accident theory. He has asked the agencies to report to him within 90 days on how the virus emerged.

China has, on the other hand, dismissed the Wuhan lab leak theory as "extremely impossible" and has accused the US of "political manipulation".