NEW DELHI/ KOLKATA: Opposition parties on Friday accused ruling Trinamool Congress of sponsoring widespread violence in the state to prevent their candidates from filing nominations for local body elections in the state. 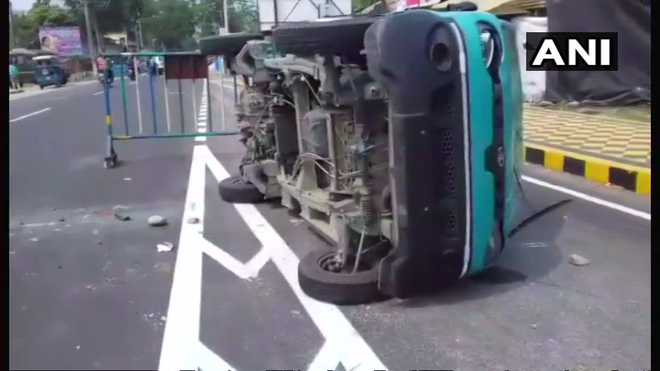 An upturned vehicle after clashes between BJP and TMC workers in Jalpaiguri, West Bengal, on Friday. ANI photo

Opposition parties on Friday accused ruling Trinamool Congress of sponsoring widespread violence in the state to prevent their candidates from filing nominations for local body elections in the state—an issue that appears to have thrown a spanner in the works for Banerjee's anti-BJP front efforts.

CPI (M) general secretary Sitaram Yechury accused the ruling TMC of launching an assault on democracy and rule of law by capturing the block Development suffices (BDOs), Sub-Divisional Offices (SDOs) and even District Magistrate offices in some district to drive away opposition candidates from filing nominations for the three-tier panchayat elections.

“This is a form of pre-election rigging which makes the election a farce,” he said.

He also voiced his distrust of Banerjee’s initiative to cobble up anti-BJP Front for the 2019 General Election, sending a strong signal that they will not be associated with any move of anti-BJP mobilisation initiated by Banerjee.

“See what is happening in West-Bengal where the TMC goons are throttling democracy with the collusive support of the government machinery. Do these people have any political credibility?”

The Bharatiya Janata Party made similar allegations against the TMC earlier in the day. The party held protests against the TMC, and asked for additional central paramilitary forces to ensure free and fair elections.

"The Trinamool Congress has turned the panchayat elections into a farce in the state," Roy said, accusing both State Election Commission (SEC) and police administration of being “mute spectators”.

“Police are acting like cadres of the TMC,” Roy said, adding that party workers of both CPI (M) and the Congress—both of which he called spent forces—should join the saffron brigade against the “TMC misrule”.

Violence was reported from Birbhum, Bankura and Murshidabad districts on Friday in which several people were injured.

The poll-related violence has claimed two lives in Malda and Bankura districts so far since the beginning of filing of nominations on April 2, the police said.

In the Nalhati area in Birbhum district, clashes broke out between the police and BJP supporters when they defied orders against holding rallies or processions while filing nominations. The directives were issued after an attack on former CPI (M) MP Ramchandra Dome allegedly by TMC hoodlums on Thursday.

The BJP workers took out a rally and were stopped by the police. A heated argument erupted between the two sides and snowballed into a clash. The men in uniform used batons and fired rubber bullets to disperse the rallyists, a police official said.

A number of police personnel were injured in brick batting by the BJP cadres.

Twenty-five BJP workers were arrested in connection with the violence, the police said.

In Bankura, BJP state secretary Shyamapada Mondal was attacked allegedly by TMC supporters when he and his party cadres were on their way to meet the district magistrate in the afternoon to submit a memorandum on the violence during filing of nominations for the panchayat polls.

He alleged that about 300 “TMC goons”, who were present there in violation of Section 144 of the CrPC clamped in the area, attacked the BJP delegation.

The TMC leadership in the district termed the allegations baseless.

Video footage aired on TV news channels showed crude bombs being hurled at Nabagram in Murshidabad district and activists of the TMC and the BJP clashing with each other over filing of nominations.

The BJP staged a demonstration in Nalhati to protest against the violence and demanded that paramilitary personnel be deployed in adequate numbers to ensure "free and fair" polls.

However, West Bengal Panchayat Minister Subrata Mukherjee told reporters at the Secretariat that there was no need for such a move.

He said central forces are not deployed for rural or civic polls.

TMC secretary general and state minister Partha Chatterjee accused the BJP of trying to foment trouble in the state by bringing in outsiders.

"The BJP will never be allowed to disturb peace in the state. First it was communal violence on Ram Navami and now they are using muscle power to stop our candidates from filing nominations," Chatterjee alleged.

He said that allegations of opposition candidates being attacked are an excuse as the rival parties do not have candidates to file nominations.

The BJP, on the other hand, accused the TMC of not allowing its workers to file nominations for the panchayat elections, and said it was trying to turn the rural polls into a farce by use of money and muscle power.

"Democracy has ceased to exist in Bengal. But the BJP will not give up so easily. Our workers are being brutally beaten up in Murshidabad, Bankura and Birbhum and police are acting like cadres of the TMC," BJP leader Mukul Roy alleged.

West Bengal PCC president Adhir Chowdhury has moved the Calcutta High Court, which today directed the police to make adequate security arrangements to ensure that candidates can freely file nominations for the panchayat elections due in May.

A division Bench headed by Acting Chief Justice J Bhattacharya ordered the superintendent of police of every district to ensure proper security arrangements for filing of nomination papers.

The Supreme Court during the day said it would pass orders on April 9 on the BJP's plea alleging that its candidates are not being allowed to file their nomination papers for the rural polls.

In its plea, the BJP has sought an extension of the last date of nomination, which is April 9.

Panchayat election is scheduled in three phases on May 1, 3 and 5. PTI