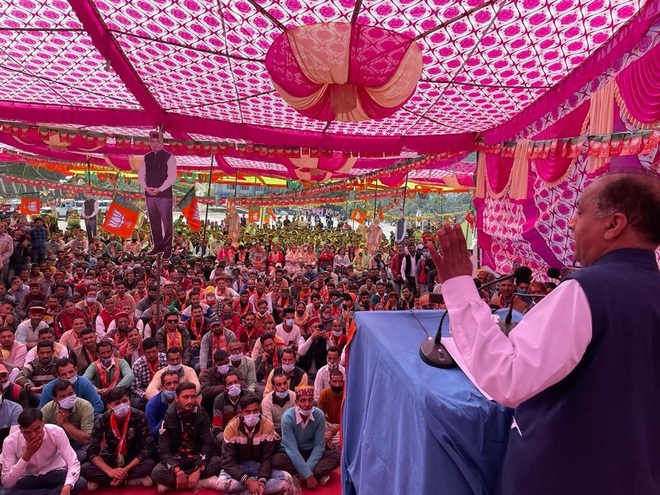 He said, “Virbhadra Singh is no more with us, we miss him. My condolences are with the family. May God give strength to his family to bear the sorrow?” He then took a dig at the Congress rally held recently at Bharmour, stating that there was less sympathy but more politics.

Thakur said, “We have also lost Ram Swaroop Sharma. We are saddened by the death of Virbhadra Singh, Narendra Bragta, Sujan Singh Pathania. Do we have to act on emotions?” he asked. Bharmour needed development, he said; adding that it could be done only when the BJP government was strengthened at the Centre and in Himachal.

“The maximum amount is being spent in the development of Bharmour,” said Jai Ram. He added that, “Bharmour has tough geography. The area is as tough as my Seraj segment”.

In the last tour of Bharmour, many projects were inaugurated and foundation stones of development works were laid despite the Covid crisis. No government had spent so much funds on Bharmour

In Kullu, Thakur appealed to people to support the son of the soil, Brig Khushal (retd), and help him win the Mandi Lok Sabha byelection by a huge margin.

The Chief Minister, while addressing a public gathering at Rambagh in Manali, said, “We will not indulge in mudslinging but Congress leaders are making derogatory remarks against BJP leaders”.