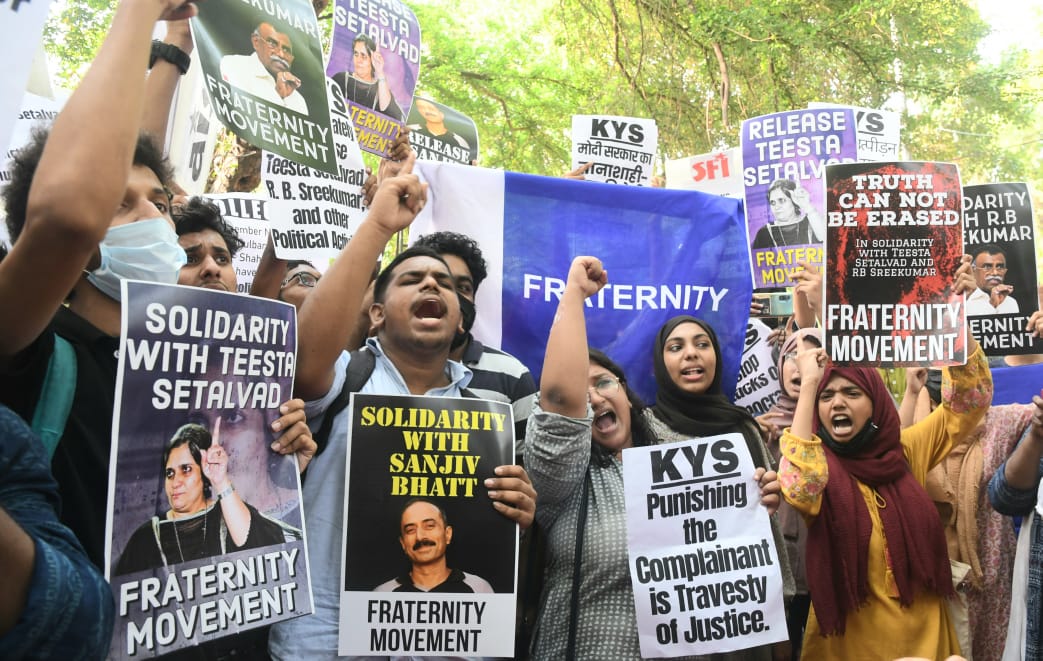 A group of students, teachers, activists and civil society members staged a protest at Jantar Mantar here on Monday against the arrest of Teesta Setalvad by the Gujarat Anti-Terrorist Squad, calling it a “pre-planned conspiracy” and an attempt to “silence” other activists.

Around 300 protesters gathered at Jantar Mantar and raised slogans demanding the release of Setalvad and former IPS officers R B Sreekumar and Sanjiv Bhatt, who have been accused of “criminal conspiracy, forgery and placing false evidence in court to frame innocent people” in the 2002 Gujarat riots.

Congress leader Maken said his party stood by the trio and demanded their release at the earliest.

Activist Shabnam Hashmi told PTI, “We think it's a pre-planned conspiracy because there is no way that the Supreme Court comes out with a judgment on June 25 and the same day an FIR was lodged and Teesta was arrested.... We strongly condemn it.” Hashmi said the arrest was an attempt by the government to “silence” and “frighten” other activists in the country.

“We know that they're giving a signal to all the activists who have been raising their voice. This is an attempt to silence and frighten them but this country is not going to be frightened,” she said.

She demanded that the trio be released and the FIR quashed.

The FIR against Setalvad, Sreekumar and Bhatt was registered on Saturday, a day after the Supreme Court dismissed a petition challenging the clean chit given by the SIT to the then chief minister Narendra Modi and others in the 2002 riots cases.

Questioning the arrests, All India Students' Association (AISA) president N Sai Balaji said, “If the fight against injustice is being criminalised, what message are they giving out? That we cannot speak against communal riots? That no one can stand with the victims?”    Speaking to PTI, All India Democratic Women's Association (AIDWA) president Mariam Dhawale said that with the arrests, the government is sending out a message that “action will be taken against those who raise their voice against injustice.”

“Every citizen in the country has the right to free speech and expression. It is not necessary that everyone has to agree with what the government and authorities are doing. This arrest is a way of govt sending out message that if you raise voice, action will be taken against you,” she said, alleging, “This is fascism and completely against our Constitution.”

Abha Dev Habib, a professor at Delhi's Miranda House college, who was also part of the protest, demand immediate release of Setalvad.