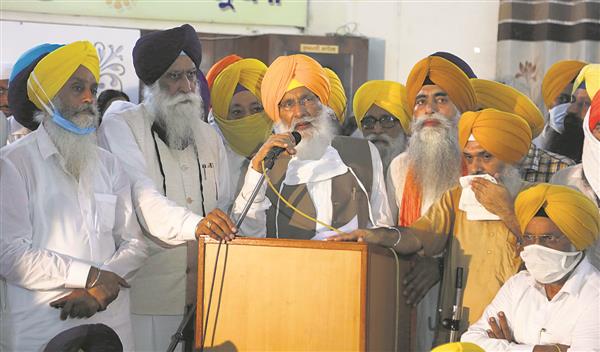 Rajya Sabha member and former Union Minister Sukhdev Singh Dhindsa on Tuesday claimed that he had taken over as the new president of the Shiromani Akali Dal. File Photo

Two days after forming a ‘parallel’ Shiromani Akali Dal (SAD), Sukhdev Singh Dhindsa got a shot in the arm as he received support from some Sikh organisations here on Thursday.

Darbinder Singh, president of the SAD, J&K, extended full support to Dhindsa’s Akali Dal during a press conference here and appealed to Sikh Sangat across the world, including Sikh Student Federation, Sikh Naujwan Sabha, Istri Akali Dal and other sub-organisations, to support Dhindsa in his fight against people who “tarnished” the image of Sikhs all over the world.

Darbinder said that the SAD was a very old party. It was formed in 1920 and had played an important role in the Independence of India.

“Unfortunately with due course of time the party which had such a glorious history and sacrifices was captured by a family and used for personal gains and made huge fortunes from the party by acquiring power for many decades,” he alleged.

They was also demanded that a committee, headed by a retired judge of the High Court, should be formed to probe “misuse” of funds by the DGPC.