Businessman, his gunman were attacked on Wednesday night 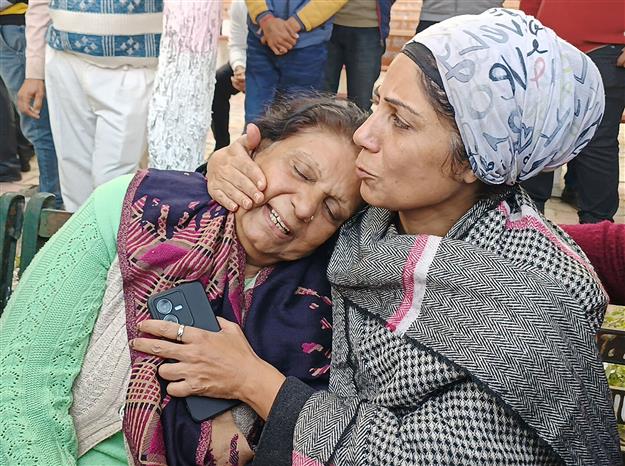 A relative of Timmy Chawla consoles his mother in Nakodar on Thursday. Tribune photos

The 39-year-old garment businessman had been receiving ransom and threat calls for the past month, regarding which repeated complaints had been made to the police. On November 1, he received a WhatsApp call from a man, who identified himself as Rinda and demanded Rs 30 lakh from him.

Timmy was shot by five unidentified bike-borne men last night when he was getting into his Brezza car in front of his garment store in the Royal Tower complex at Malri Road, Nakodar. Both Timmy and his gunman were shot in the incident. As per preliminary reports, Timmy was shot four times and gunman Mandeep Singh was shot five times.

While Timmy died on the spot, his gunman had been admitted to a hospital, where he succumbed to his injuries this morning.

Timmy, who was married, was father of two girls, aged seven and four. His cousinbrother Shaify Chawla is the president of the BJP Yuva Morcha, Jalandhar Rural.

An FIR has been lodged against five unidentified persons under Sections 302, 307 and 34 of the IPC and 24, 54, 59 of the Arms Act at the Nakodar City police station. Timmy’s last rites were conducted at Nakodar today with a large number of people turning up at the cremation to extend solidarity with the family.

Jalandhar Range IG Gursharan Singh Sandhu said: “Two gunmen had been provided to Timmy Chawla a month ago. The second gunman was not present with him at the time of the incident. An FIR had also been lodged in the case of extortion calls to him.”