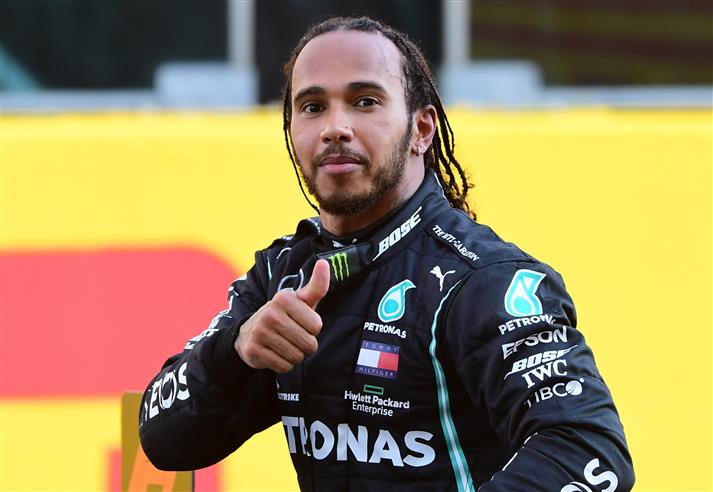 Mugello (Italy): Lewis Hamilton celebrated the 90th win of his Formula One career, one short of Michael Schumacher’s all-time record, after a crazy crash-strewn Tuscan Grand Prix today that was twice stopped and re-started. The six-time world champion’s Finnish teammate Valtteri Bottas completed the one-two for dominant Mercedes at the Ferrari-owned Mugello circuit. Red Bull’s Thai driver Alexander Albon, whose teammate Max Verstappen retired in the gravel at the second corner, took third place. The race was Ferrari’s 1,000th championship Grand Prix but the best the struggling Italian team could manage was eighth for Charles Leclerc.

Salah does the trick

Liverpool: Liverpool and Arsenal got off to winning starts with victories over promoted sides on the opening day of the new Premier League season yesterday. Mohamed Salah scored a hat-trick as champions Liverpool won a seven-goal thriller with hugely impressive Leeds United at Anfield with the Egyptian grabbing the win from the spot in the 88th minute of a 4-3 victory. Arsenal enjoyed a more comfortable opening day with a 3-0 victory over Fulham at Craven Cottage. Crystal Palace beat Southampton 1-0. Jamie Vardy converted two penalties to help Leicester City get off to a winning start with a 3-0 victory at promoted West Bromwich Albion. Reuters

New Delhi: Former India pacer S Sreesanth’s ban for alleged spot-fixing came to an end today, concluding a seven-year punishment that was originally meant to be for life and was aggressively contested by the flamboyant bowler. The 37-year-old has already made it clear that he intends to resume his domestic career, and Kerala has promised to consider him if he manages to prove his fitness. The BCCI had banned Sreesanth for spot-fixing in the 2013 IPL. But on March 15 last year, the Supreme Court set aside the BCCI order and asked the board to reconsider the quantum of punishment. The life ban was reduced to seven years by the BCCI Ombudsman last year. PTI

Is it safe to organise tournament during Covid-19, asks Saina

New Delhi: Indian badminton star Saina Nehwal today raised concerns about the timing of next month’s Thomas and Uber Cup, asking whether it would be safe to go ahead with it during the Covid-19 pandemic. “7 countries have withdrawn from tournament cause of the pandemic...Is it safe enough to conduct this tournament during this time??,” she tweeted. South Korea, Thailand, Indonesia, Australia, Taiwan, Singapore and Hong Kong have withdrawn from the October 3-11 event. PTI

Sharma cards 71 in final round

Vilamoura (Portugal): Indian golfer Shubhankar Sharma had a roller coaster final round to finish at 3-under at the Portugal Masters here today. He made four birdies and four bogeys for an even-par 71 final round. Sharma was tied-45th with many players still to finish their rounds.

Napa (California): Indian golfer Anirban Lahiri kept his card clear of bogeys for the second day running as he returned a 5-under 67, which included an eagle on the 18th, to be tied-33rd after the third round of the Safeway Open here. Lahiri is 10-under for 54 holes. PTI