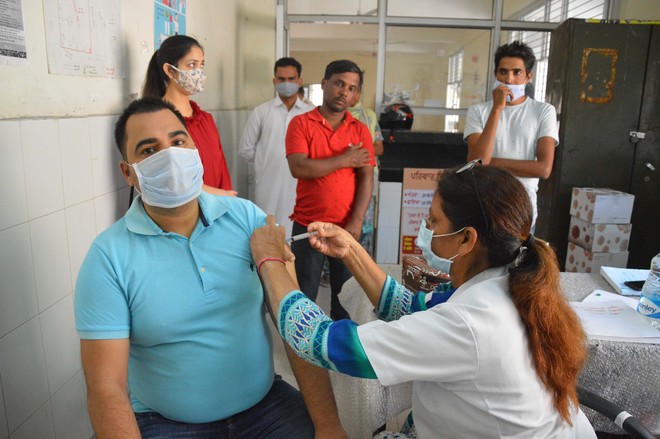 A man gets vaccinated against Covid in Ludhiana. photo: Inderjeet Verma

Even as Covid has made a gradual retreat in the past couple of months, the daily positivity rate – a key indicator of virus surge – has risen to a 38-day high in the district.

The count of daily cases in the district has also touched the highest in the state, as per the official figures.

The data analysed by the district administration, a copy of which is available with The Tribune, showed that the daily positivity rate remained less than 0.1 per cent for the past 38 days before reaching 0.11 per cent on October 20, which was on par with the positivity rate recorded in the state on that day.

The district had last registered 0.11 per cent positivity rate on September 12.

Similarly, the district logged eight positive cases on October 20, which was the highest in any district of Punjab on that day. However, the daily cases came down to four on October 21. The previous one-month high in the district was nine cases, registered on September 12.

Ludhiana registered one case each on October 22 and 23.

The district was the worst-hit during the second Covid wave. But it made a remarkable turnaround with a daily positivity rate of below one per cent.

If it was mayhem in May, when the second Covid wave had rapidly slid into a devastating crisis, June had provided a sigh of relief, with the signs of gradual retreat and impact of deadly virus plateauing. The safe trend has continued in July, August, September, and so far in October. The hit rate dipped to as low as 0.02 per cent today.

The daily hit rate has been plummeting constantly since the last week of May.