MoS Science and Technology Jitendra Singh says the government is working on cancer-prevention in a mission mode; qHPV to be launched for use in a few months 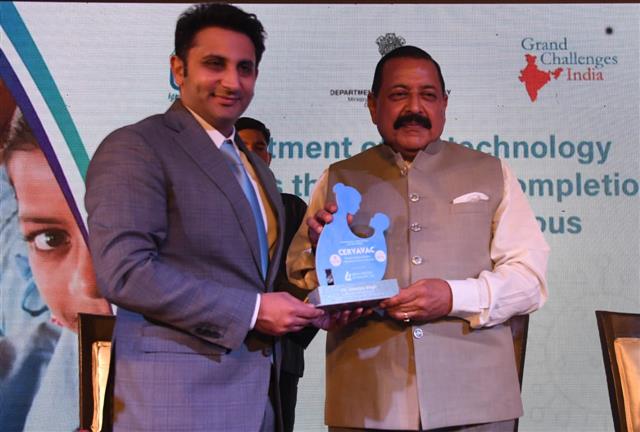 India on Thursday unveiled the first indigenous quadrivalent human papillomavirus vaccine (qHPV) as a primary prevention tool for cervical cancer, the second most common cancer affecting young women, after cancers of the breast.

Cancer of the cervix is the second leading cancer among women aged 15 to 44 after breast cancers with 90 per cent mortality due to this cancer reported in low- and middle-income countries.

A third major example of public-private partnership in vaccine development -- after the development of rota virus and covid vaccines -- the qHPV shot has been developed in collaboration between the Department of Biotechnology under the government and the Serum Institute of India, Pune.

With market authorisation granted by the Drug Controller General of India in July this year, the shot will be launched into the national programme in a few months, MoS Science and Technology Jitendra Singh said, adding that today's announcement of the vaccine was meant as a celebration of the scientific effort that went into developing the shot.

"We are here to celebrate the script writers of this wonderful story of scientific discovery and self-reliant India. Once the vaccine hits the markets for use, manufacturers will get all the credit and rightly so. By then it will be too late to recall the script writers," Singh said praising DBT secretary Rajesh Gokhale and his team for the work.

Speaking about the vaccine, AIIMS obstetrics and gynaecology professor Neerja Bhatla said the vaccine is safe and effective although one would have to wait longer for around a decade to see if it reduces cancer.

"Evidence from the UK and Nordic countries has shown fast reductions in cancers with vaccines even though these are slowly reducing cancers. The shot is reliable, safe, affordable and the good thing is we now have a solution for a very deadly disease," Bhatla said, calling for the shot to be administered to young boys also to prevent other cancers caused by HPV and also to address the problem of genital warts and raise herd immunity.

"This is a testament of what we can achieve together. Hope we can work together to develop more vaccines and drugs. This is not a launch. We will launch in a few months. This is to celebrate science and a momentous milestone," Adar said.

The minister for his part said the government was working in mission mode on cancer prevention.

"This is the first indigenous vaccine for HPV. It is affordable and adds to the esteem of common Indians. We are already working on preventive health-care in the cancer sector. We have of late started a process of opening cancer sub centres. Five years ago, we began one in Guwahati which is now running a DM on oncology medicine course and an MCH in oncology surgery. Tata memorial cancer hospitals have been set up in Bihar, Uttarakhand, Varanasi and recently in Mohali," Singh said.