Elections on mind, was on inauguration spree earlier too 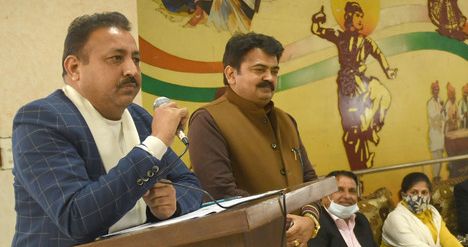 With the MC elections just about five months away, Mayor Ravi Kant Sharma is on an inauguration spree. He has carried out seven inaugurations in the past fortnight and will now be laying 13 foundation stones in a span of just seven days.

From August 9 to 17, except for August 14 and 15, he will be laying foundation stones for water supply, drainage and storm water sewerage system in 13 villages. Each day, he will lay stones of projects in two villages.

“All these projects have already been passed and the work has been allotted. Thus, I will be laying the foundation stones. It will be a great relief to villagers. The work is being done after the villages were merged with the MC,” said the Mayor.

Leader of Opposition Devinder Singh Babla said, “I condemn this. Before the completion of his tenure, he is just trying to get his name mentioned on the foundation stones. Rather than doing so many inaugurations in villages, he should have got the problems of villages resolved. People in colonies and villages are very fed up of the issues.”

His inaugurations had earlier inconvenienced local residents as the police had barricaded a large area following an attack on his car during a farmer’s protest in Sector 48. It is yet to be seen how things are going to unfold for the First Citizen when he will visit the villages for laying foundation stones.